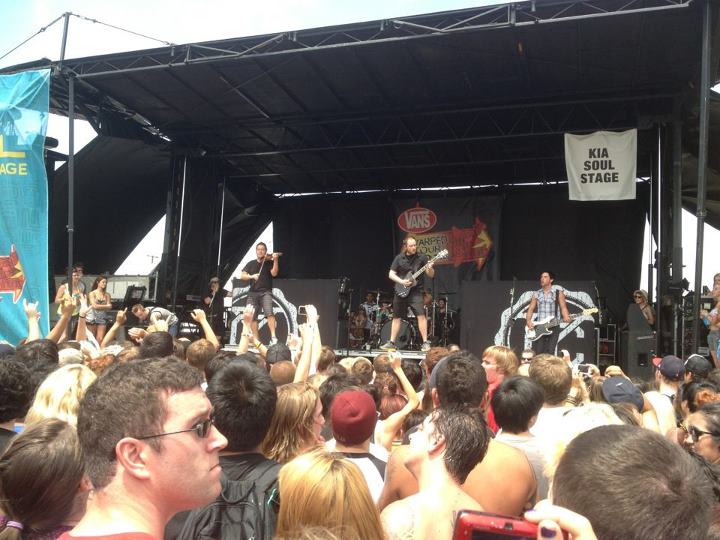 People of all ages flocked to see their favorite bands and performers at the Vans Warped Tour in Dallas on July 3. Music constantly blared from at least one of the seven stages, allowing for more than 50 performances throughout the day. The diverse crowd and large amount of activities occurring could be overwhelming for someone who has never been in this sort of atmosphere.

There were stages and different booths scattered all around the area surrounding the Gexa Energy Pavilion. Although there were many stages, the Kia Soul Stage and the Kia Rio Stage had the majority of the well-known bands playing. Before going to watch the bands, it was necessary to find the large stand with all the performance times listed, but it was extremely helpful to buy a map at the beginning of the day that marked the location of each stage as well as the line-up.

Of Mice and Men performed well and the crowd was caught up in the music, but this concert was nothing compared to some others that occurred later. One of these bands was Anti-Flag, who played at the Kia Rio Stage, inside the Gexa Energy Pavilion, where there was a pit area as well as seating. In one instance, lead singer Justin Sane emphasized that anyone who fell in the pit should be helped up, and when someone actually fell, Sane interrupted the song to tell the crowd to help the fallen listener up. Almost the entire time Anti-Flag was playing, entranced fans were moshing in the pit. The sense of excitement and camaraderie made this one of my favorite concerts at this year’s Vans Warped Tour.

Immediately after Anti-Flag, Yellowcard played at the Kia Soul Stage. Unfortunately, the proximity of the starting times and the distance between the two stages made it easy to get separated from a group or to show up after the bands had already started playing. Yellowcard had a great show and had more familiar music than some of the other bands that played newer songs. Everyone listening to Yellowcard had his or her hands in the air, jumping to the beat of the music while supporting the weight of crowd-surfers floating towards the front of the stage.

When there was downtime between bands, there was an opportunity for people to explore and visit different booths. The entire day, free handouts and opportunities created a better experience. Groups such as People for the Ethical Treatment of Animals looked to inform the youth with pamphlets, while the 7-11 booth passed out small Slurpees. There were also chances for fans to buy merchandise or get autographs from some of their favorite performers at meet-and-greets.

The biggest problem was choosing what band to see if several were playing simultaneously. Mayday Parade and We the Kings began five minutes apart and forced fans to choose between the two.  If someone were to choose We the Kings, they would see an example of a crowd that lacked energy compared to bands such as All Time Low, where fans were livelier, especially closer to the stage.

This year there was a stellar line-up, and with the right attitude anyone could have a great time. The heat and large volume of people could not overshadow the electric atmosphere and free-spiritedness of the people attending this event. With an open mind and enough water, there was no way someone could not have had fun at Vans Warped Tour.