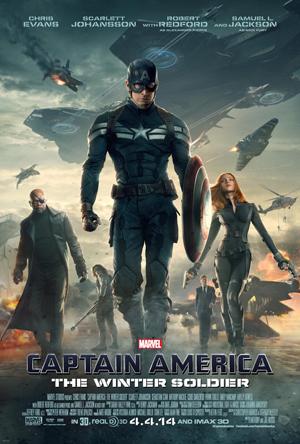 Steve Rogers possesses all the qualities a good superhero should: he’s strong, brave, kind and has a good sense of humor. You can catch him defending the world with his shield in Marvel’s latest release, “Captain America: The Winter Soldier.”

The movie is a sequel to the first Captain America, and starts right where it left off with Rogers (Chris Evans), attempting to find his place in the world. He has missed decades of life, frozen in ice after falling from a drone plane in the Atlantic Ocean. He now works for S.H.I.E.L.D, or the Strategic Homeland Intervention Enforcement and Logistics Division.

S.H.I.E.L.D director, super-spy Nick Fury (Samuel L. Jackson), plays the role of Rogers’ mentor. Fury’s life, along with S.H.I.E.L.D, is compromised by powerful people and a man named The Winter Soldier, who seems to be invincible. It is up to Captain America and his allies, The Black Widow (Scarlet Johansson) and Falcon (Anthony Mackie) to restore order.

The movie was packed with an incredibly satisfying amount of action. It was engaging the entire time and kept me on the edge of my seat, with plot twists around every corner. As someone who doesn’t know an abundance about the Marvel superheroes, I never saw any of the twists coming. Additionally, the animation was extremely realistic. It is difficult to tell that not everything in the movie is real. The gray, enormous planes in the sky, on which Captain America fought multiple times, appeared to be lifelike with their expansive wings and plethora of technology.

All the characters, both friends and foes, have unique personalities that either make you fall in love with them or hate them. Of course, this wouldn’t have been possible if it wasn’t for all the actors who executed their characters perfectly. There was no moment in the movie where I stopped to dwell on any poor acting. Evans allowed Captain America to shine with a humble, yet wise character, while Johansson played her role of the Black Widow perfectly, destroying any remains of gender stereotypes. She defended, attacked, flipped, sassed and killed until she no longer could. However, I would have to say my overall personal favorite was Mackie’s character Falcon, with his ability to create humor in any situation and swooping in to save the day when most needed.

The only problem I have with this movie is that viewers require background knowledge to understand some plot points. If you haven’t seen the first Captain America, the movie will still be enjoyable, but I recommend watching it first or reading about it to avoid confusion. Also, this movie is not for those easily disturbed. It is filled with violence and a few futuristic concepts, such as a mind being salvaged through a computer without a body. However, my uneasiness during these parts only drew me in further, as they were continually intriguing.

Overall, I highly recommend this movie. Though the movie may follow the typical superhero formula, which always includes the superhero and his call to action, a female interest, an evil enemy and a faithful sidekick, it pulls it off extremely well. Every scene will either surprise you, make you sympathize, or make you laugh. If you don’t want to go for the remarkable plot, then go for the realistic effects.