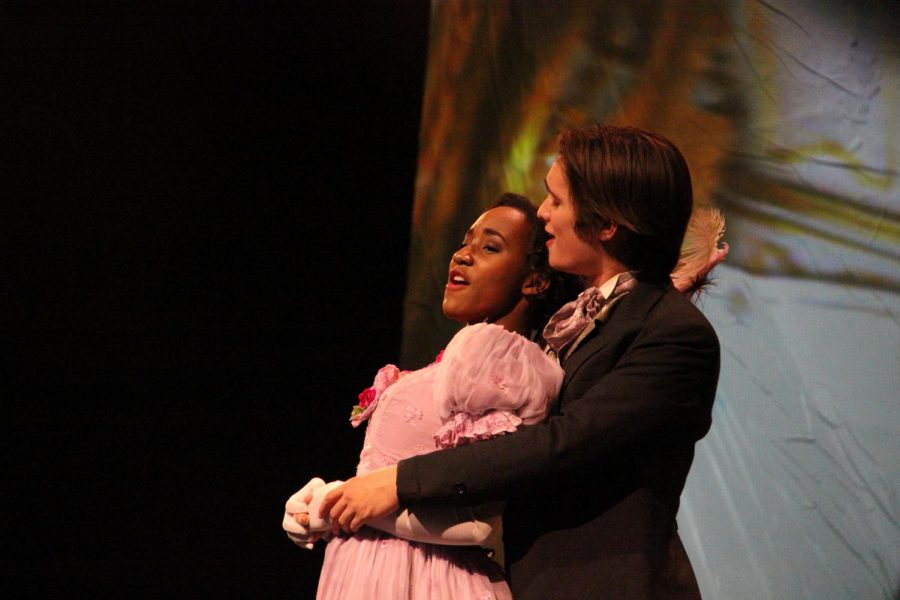 Jekyll & Hyde is a dramatic musical based on Robert Louis Stevenson’s book, Strange Case of Dr. Jekyll and Mr. Hyde which is set in late 19th century London. Dr. Henry Jekyll decides to devote his life to his experiment in order to see if man has a truly evil side. Without any volunteers, Jekyll performs the experiment on himself, resulting in the creation of Edward Hyde.

Senior Max Kuenzer is returning to the stage after playing Jimmy Winter in last year’s musical, Nice Work if You Can Get It. Kuenzer’s portrayal of Dr. Jekyll and Mr. Hyde was astounding as he showed the transformation of a man into a monster. Kuezner’s powerful voice gave the audience chills throughout the show.

Senior Marlei Dismuke played Jekyll’s fiancée, Emma Carew. Dismuke’s performance was heartwarming as she always saw the best in Jekyll throughout the entire play. Her sweet soprano voice definitely stood out in her solos, for example, in the song “Once Upon a Dream,” from the second act.

One of the highlights of the show was Dismuke and Kuezner’s duets. Both voices together in songs such as, “Take Me As I Am,” made the audience emotional because of the romantic and hopeful themes. This song was a touching duet between Jekyll and Emma about how they would always be there for each other. The two had a tender and natural stage chemistry that allowed the audience to believe that their characters were in love.

Another memorable performance was senior Spencer Marren as Lucy Harris. Harris was a prostitute at the town’s bar, The Red Rat. Marren’s portrayal of Lucy at the beginning of the musical was that she was a powerful woman, but as the show progressed Marren showed Lucy’s deep, unrequited longing for Jekyll. Marren’s powerhouse vocals were also a highlight of the shows performance.

Jekyll & Hyde would not have been as great as it was without the chorus. Impressive high notes and unified voices from the chorus equally balanced those of the leads to create a powerful performance. Eerie dance moves by the group were emphasized to add a mysterious effect to the show. It is obvious that the chorus worked hard to perfect their dance moves because it was definitely shown on stage.

The cast’s acting was incredible as well. With choices as simple as performing with an accent, the actors made the audience believe that they were actually in London. Kuenzer’s performance was the most astounding of the night, since he transformed back and forth from Jekyll to Hyde with ease.

Aside from the brilliant singing and acting, the tech crew created an efficient combination of lighting and props to enhance the stage. The crew projected detailed scenes, such as the brick building, to make the set come to life. Also, an interesting part of the set was the fragments hanging from the ceiling. Flickered lights upon these pieces in intense scenes portrayed the chaos in Jekyll’s mind.

Overall, the musical was an unforgettable night and was worth the audience goers’ money.