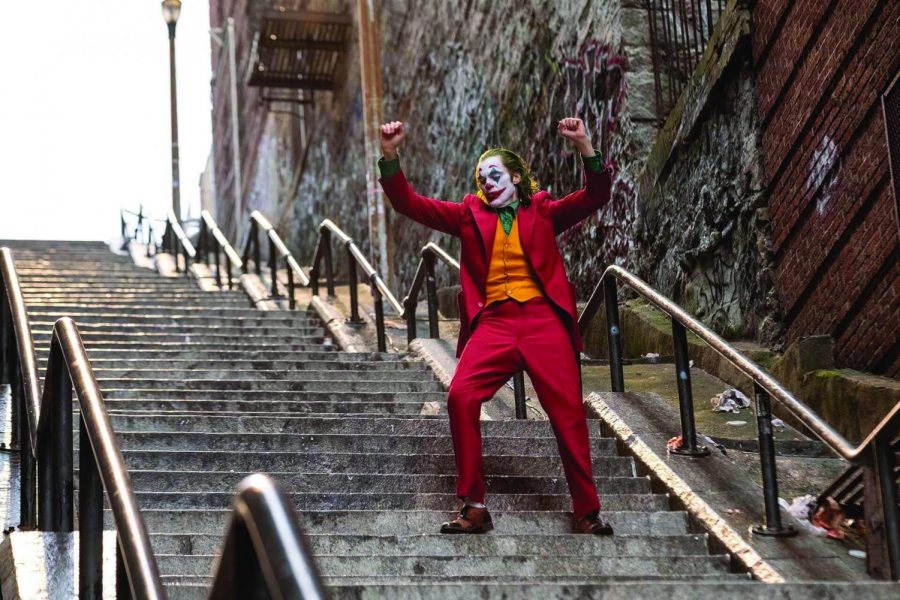 Arthur Fleck aka the Joker played by Joaquin Phoenix dancing in a scene as he finally accepts himself for who he is.

The insanely popular comic book movie genre is getting a much needed dose of grit and realism with the release of the film Joker.

The film was directed by Todd Phillips and stars Joaquin Phoenix as the titular villain, with Zaize Beetz and Robert De Niro as small supporting roles.

The film that isn’t afraid to show how gruesome and bleak a character like the Joker can be. Phoenix pulls his heart and soul into the role, with the film containing him in nearly every single scene.

There’s a noticeable similarity to films like The King of Comedy and Taxi Driver, which showcase what happens when a mentally-ill loner has enough of society and commits heinous acts. There’s less inspiration taken from the comics and more implemented from these films, especially the setting of a late 70s to early 80s New York Style city.

The plot of the film is just as fragmented and unreliable as its protagonist, detailing the fall of a mentally-ill man in a city that doesn’t care. Arthur Fleck is the alias of the Joker who’s beaten down by society on every level and never gets the aid he needs to prevent from going insane.

At the beginning, the audience is meant to sympathize with Arthur’s plight, but his descent to madness causes a sickening and unsettling feeling to emerge.

The ending invokes that Arthur is a psychopath who feels no remorse for his actions.  Although his story is a tragic one, he should not be looked upon as a hero.

The cinematography is a character upon itself, shot in such a way to reveal how far off the deep end Arthur has gone. Gotham city is shot to look grimy and dirty, with trash bags on every street corner and every interior being uncomfortably cramped.

The supporting cast do their parts well but are on screen for only a small amount as Joker is truthfully the main character. De Niro puts in a memorable performance as a talk show host who Arthur admires and seeks attention out of. Zaize Beetz is the traditional love interest but her role becomes more interesting and complex later into the runtime.

Additionally, the ominous and desolate score contributes to the film’s demoralized tone and message. Throughout the runtime the score becomes increasingly more unhinged and disturbed as Arthur transforms into the Joker.

The main strength of the movie is Phoenix’s uncanny and disturbing performance as the Joker. He executes something unique with the character by making his laughter an uncontrollable condition he suffers through.

Arthur is insane and thus the movie is filled with scenes that seem to be real, but in actuality are fabricated fantasies. The movie does a splendid job of making the audience question what’s real and what’s in Arthur’s head.

The film closes in an uncertain, but satisfying way that makes the whole story of Arthur Fleck’s transformation to Joker feel complete.

The film Joker is a splendidly acted by Phoenix and offers a twisted, but a breath of originality to comic book movies and the movie industry in general.

Although the film isn’t the usual popcorn and fun affair audiences are used to from comic book movies, presents a unique character study that delves into the decreasing sanity of a man thrown into a corrupt society. The film is bold and successful with the risks it takes but not everyone will get on board with.