Shane Dawson and Jeffree Star shake the internet with the Conspiracy palette. 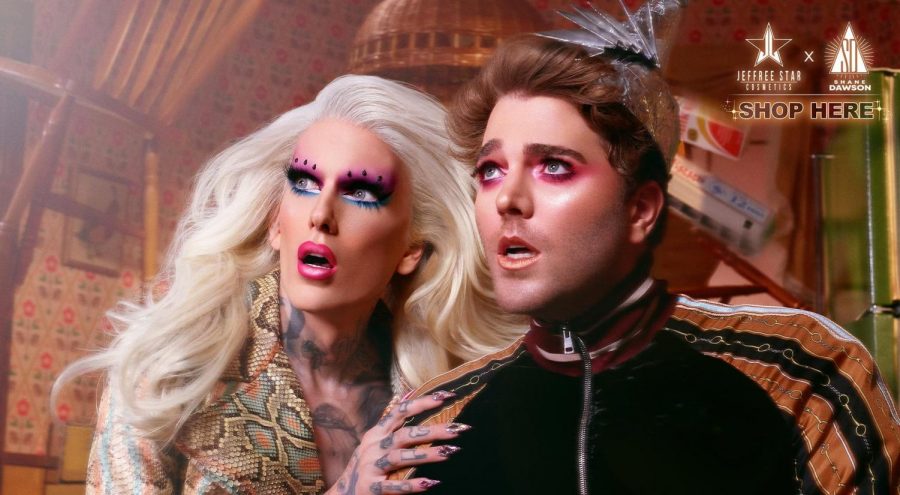 Star and Dawson posing for photoshoot of the Conspiracy palette.

After nearly a year of hard work and anticipation, business partners, Shane Dawson and Jeffree Star dropped their first makeup collection together on Nov.1.

Dawson grabbed the attention of viewers when he announced his collaboration with Star over Twitter in July. Within two weeks he released his web series, “The Secret World of Jeffree Star.” The series featured the makeup idol, documenting not only his makeup career but personal discordances he has experienced throughout his life. The six-part series illustrated realistic conflicts that occur daily in the beauty community and allowed the audience to see what really goes on behind the scenes. During the series finale, Dawson left everyone bemused when he teased he might be working his own makeup collection.

Returning back almost a month later Dawson posted his new series trailer, “The Beautiful World of Jeffree Star.” This confirmed the rumors and gave fans a sneak peek to his very own makeup journey. Fans took to social media and flooded them with positive comments and support.

On Oct.1 the first video was released, bringing over 20 million views. Soon news organizations everywhere were reporting the YouTubers. This was the first time in the beauty community an artist has documented the full creation of a makeup collection.

“They are revealing formerly private and the shocking process of launching a makeup line,” E-News said.

During the series, Dawson and Star had to find solutions and work through perplexing issues. The two artists were hit with theft, scandals, financial worries, and personal conflicts. They also illustrated all the diligence that goes behind creating the piece.

Finally, after almost a year of dedication, Jeffree Star and Shane Dawson unveiled their “Conspiracy Collection” on Oct. 29. The reveal was an hour long and featured the extended collection, which includes the “Conspiracy” pallet, the mini “Controversy” palette, lip gloss, mirrors and travel bags.

“The conspiracy pallet is beautiful and includes colors for everyone,” Paytas said in her review.

Stars’ team was first expecting to bring in $20 million from the collection, but after the release of Shane’s series, the number climbed to $35 million. After only thirty minutes into the release, Dawson and Star sold a total of one million eyeshadows. The two have sold out their full collection breaking JSC records. They are already manufacturing and distributing more.

Fans can purchase the collection on JeffreeStarCosmetics and all retailers that stock Star’s products.