Musgraves gives fans a fun and festive show for the holiday season. 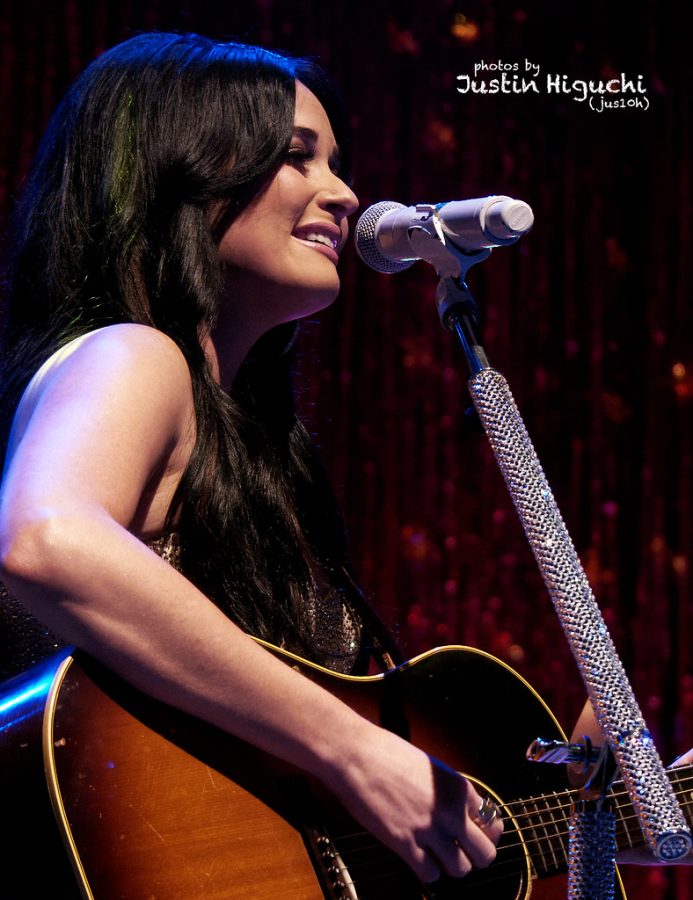 Kacey Musgraves serenades audiences with her country twang and songwriting.

The Kacey Musgraves Christmas Show is a festive variety special the Golden Hour album singer performs in partnership with Amazon Prime Video, where she has musical guests, famous comedians, and a whole lot of Christmas fun.

Musgraves’ storyline for her special takes place on Christmas Eve, illustrating her need to decorate for all her guests and family that arrive on Christmas the next day. However, after being on tour all year she is in a rush to get presents, decorations, and most importantly, her Nana’s Christmas tree topper.

Musgraves’ Christmas Show is set up as an obviously fake live show that transitions from a musical act to producers in the camera room filming the show, and then on to the next act. These different skits and musical performances are interspersed with comedian Dan Levy’s commentary, which really helps with the repetitive nature of the special.

The color-themed rooms of Kacey’s set provide an aesthetically pleasing atmosphere for each song she performs, and not to mention the amazing monochrome color outfits that match the rooms she wears as well.

The glitz and quirkiness of her cozy Christmas set is enough to impress even the most vile of Grinches, and the playful atmosphere warms the hearts of the coldest snowmen.

However, while Kacey’s set is beautiful and festive, her guest list is even more grand. Celebrity cameos such as Lana Del Rey, Leon Bridges and Troye Sivan come to duet with Musgraves, along with comedians Fred Armisen and James Corden.

Levy’s dry and pessimistic humor brings the odd show together, the over-the-top eclecticism being grounded by his jokes between almost every number.

While the special lacked an interesting narrative, it was still able to be appreciated as what it was,  a cheesy Christmas extravaganza. Of course, it was no White Christmas, but it was a cutesy little show to watch with family when there’s nothing to do on Christmas day.

The musical numbers themselves are executed very well. The joyful tone of the special makes it easy to appreciate the showy and festive numbers, however, the spaces in between were a little weird when it was only Musgraves and her guests interacting.

Musgraves’ acting was just awkward, to put it simply.  Her lines ran flat, and her humor didn’t land well with the audience, although this might not be her fault as the whole show seemed a tiny bit too scripted for any real comedic sustenance to be built.

Although Musgraves’ acting wasn’t superb, she did make up for it with her beautiful singing, the field she actually has a profession in.

Her show included renditions of Christmas classics, such as “Rocking Around the Christmas Tree,” “Have Yourself a Merry Little Christmas” and “I’ll Be Home For Christmas.” However, the most special numbers are Musgraves’ own songs she performs, like “Glittery” and “Christmas Always Makes Me Cry.”

Musgraves seems to shine while singing her original music, and the audience can see her true stage presence when she’s just by herself, being Kacey. The woman who stole everyone’s hearts when she won a Grammy for Album of the Year in 2019.

Some duets, like “Not So Silent Night” (with Fred Armisen) are less song-like, and more for the comedic entertainment of the audience. For example, Musgraves’ performance of “Let It Snow” with James Corden features buckets of Snow being dropped on to them every time they sing “Let it Snow.”

Other duets, like “Mele Kalikimaka” with Zooey Deschanel, are pure musical numbers that make viewers smile because of Musgraves’ sweet Southern charm and the sparkly nostalgic atmosphere created by the set and wardrobe.

At the end of the special, Musgraves gets a “surprise” appearance by her Nana, who just so happens to have the Christmas tree topper Musgraves has spent the whole show trying to find. Although cheesy, it is a nice ending to the special, showcasing what Musgraves believes Christmas is all about, family.