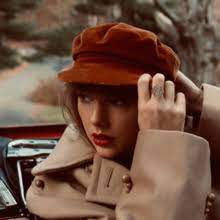 “I feel that Taylor’s version of Red really shows how truly ground [breaking] she is,” junior Alexis Davis said. “[It] also shows how much she has grown as an artist [since] 2012 while still being able to replicate classics from our childhood.”

At the start of her musical career, then 15-year-old Swift signed a deal with Big Machine Records. This deal stated that Big Machine owned the master recordings of Swift’s first six albums while she only owned the copyrights to the songs she wrote.

After her sixth album “Reputation,” Swift ended her partnership with Big Machine and in 2018, she signed with her current label Republic Records and Universal Music Group.

In 2019, Swift found out through the internet that her records were sold to Ithaca Holdings LLC, owned by famous music manager Scooter Braun. Then in 2020, Swift’s masters were sold by Scooter Braun to Shamrock Holdings without her knowledge. After two times of being unknowingly deceived, Swift decided that she would no longer stand by and watch her music be controlled by someone other than herself.

After first hearing about the selling of her music, Swift released a statement on Twitter in 2019 that said “Hopefully, young artists or kids with musical dreams will read this and learn about how to better protect themselves in a negotiation. You deserve to own the art you make.”

To gain control of her own work, Swift began working on re-recording her albums. On Apr. 9, she released “Fearless (Taylor’s Version)” under her new label. This is just the first of the multiple albums that Swift plans to re-record to gain ownership of.

Swift has been recognized and praised not only for her record breaking album, but also for her short film for her song “All Too Well.” Swift was on “Late Night with Seth Meyers” and “The Tonight Show Starring Jimmy Fallon” where she was able to discuss the short film along with the importance of her re-recorded albums.

Swift’s album has not only left a lasting impact on her fans, but also on artists who have gone through the same situations as her. Additionally, it has the potential to influence the business interactions of new musicians and teach them to be knowledgeable about the industry.

“I think Taylor re-recording her old albums has a positive impact on the music industry, especially for women,” junior Hannnah Nyguen said. “Young upcoming artists will learn and benefit from her based on her unfortunate experience.”