Places all across Plano for high school students to take pictures for any special event. 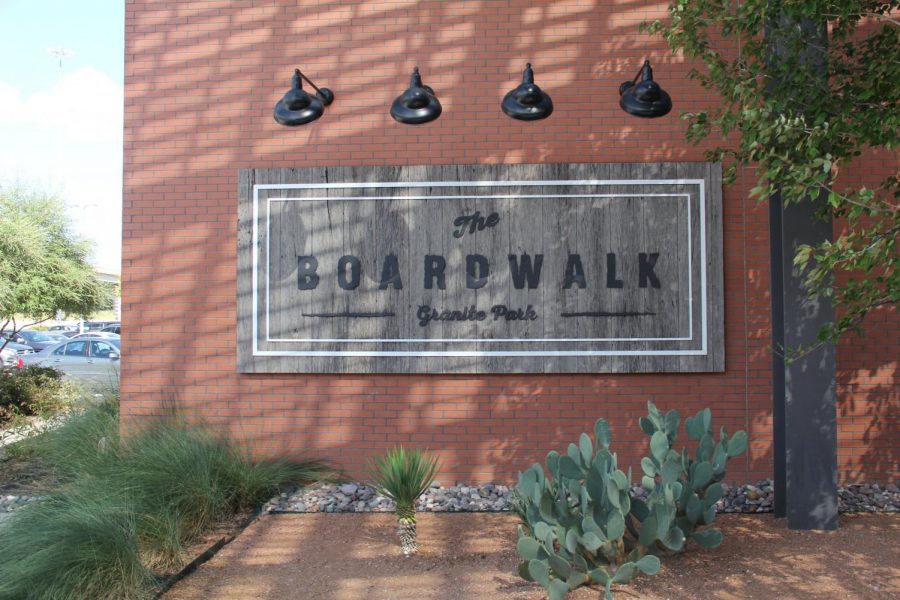 The boardwalk is a great place for students to take their photos for homecoming (photo by Rose Wright.)

Excitement  grips the student body as homecoming draws closer each day, with one thing that is the most important, where to take pictures.

Tradition is that students take pre-dance pictures at popular locations, such as Arbor Hills Nature Preserve, Haggard Park, and Watters Creek. However, some new places to scope out are The Boardwalk at Granite Park and Legacy West, along with an even simpler location, the backyard.

Haggard Park is an aesthetically pleasing  place to take pictures, with the classy nature of Historic Downtown Plano complimenting everyone’s fancy attire. The colonial architecture of the park doesn’t take away any attention from the dresses and company who take pictures there.

“I had a family friend take my group’s pictures with a nice camera, the pictures turned out perfect with the scenery,” senior Nosso Karamoko said.

However, the main issue is how busy it can get, especially with the hundreds of students attending homecoming, and Haggard Park being so close to the school.

“The fact that the park is an open public space, we all had to share our time,” Karamoko said.

A new and different option is The Boardwalk at Granite Park, which is farther away from the school than Haggard Park, but just as close as Arbor Hills. Although The Boardwalk is a relatively new establishment, it is bursting with new businesses.

“I like the Boardwalk because it has really nice places to go eat and hang out with friends, especially if you like sitting outside,” junior Rayanne Ghasani said.

It has a row of restaurants and various cafes down one side, and then a large pond down the other side, with a walkway and plenty of seating in the middle.

“It’s very charming and lively, it would be a great place to take homecoming pictures in my opinion, but it is kind of far away,” Ghasani said.

Taking pictures at The Boardwalk would make for a great background, especially due to the several restaurants that make up half  the grounds.

“It’s really vibrant, and the lights during night time would make for a good background,” Ghasani said.

The Shops at Legacy West has plenty to offer, including a new environment to take pictures.

“My group chose Legacy because it was so big and would easily accomodate all of us,” junior Maggie Darst said.

Albeit far away from the school and bustling with regular people trying to eat dinner or shop around, Legacy West can offer an environment fit for the occasion of Homecoming with its fancy appearance.

“We took them in the Omni Hotel, which wasn’t busy at all, so we were able to get a lot of pictures in,” Darst said.

While Darst took her Homecoming pictures inside the Omni Hotel, another good place is right in front of the fountains they have that glow with different coloured lights at night. They’re located right outside of the restaurant North Italia, an option for dinner afterwards.

“There were plenty of restaurants nearby, including a Sprinkles Cupcakes which was really cool,” Darst said.

Although technically challenging due to the busy avenue, it has the potential to be a to take homecoming pictures that don’t look exactly like everyone else’s.

“It was really fun to take pictures with such a big group, since there were 20 of us, especially in the Omni Hotel,” Darst said.

Back to another reasonably popular picture location, Arbor Hills Nature Preserve. Each year, a couple groups that go to homecoming together take pictures here, despite the fact that heels are bound to get ruined by the grass and dirt.

“I went to Arbor Hills to take pictures because it’s very scenic and close by,” senior Emily Kolb said.

However, it’s less of a struggle than one might think considering the trail is mostly concrete, and it’s an easy spot to view the park’s lush landscape.

“I loved how the pictures turned out, it wasn’t too hard to get to the spot we took them at, I think I would rate the experience an eight out of 10 overall,” Kolb said.

Arbor Hills has a lot of green terrain to offer for the students willing to take homecoming pictures there, the natural scenery providing a pleasant contrast to the glitz and superficialness of regular dance attire. Although the struggle between nature and expensive clothing still remains a challenge.

Watters Creek at Montgomery Farm is another well-known option, and can be very appealing to take pictures at because of all the nearby restaurants and scenery.  However, the main issue is the popularity it holds among other students also attempting to take their homecoming pictures.

“There were so many people there, from like different homecomings too,” senior Kelsie Cameron said.

It also has options for dinner, with The Cheesecake Factory being right next to it, and various other restaurants crowding the shopping centre. The landscape has the potential to be picturesque, taking into account the time of day pictures are taken. For example, taking them at sunset with the light reflecting off the water of the pond.

“I think the pictures turned out good, it was just us taking them of ourselves, and then sometimes random people we asked,” Cameron said, “I would rate it a seven out of 10, I think we might take our pictures there again this year.”

One of the potential issues of taking pictures at Watters Creek is the hill covered landscape, which makes it difficult to roam along with a group for a while.

“I just remember it being super cold, and my feet hurting a lot from my heels, it was hard walking around,” Cameron said.

However, the simplest location of all is super close, the backyard. Senior John Marshall had his group of friends just take homecoming pictures at his own house, decorating his backyard in fairy lights in order to dress it up for the eventful night.

“It was way too dark to take pictures somewhere else, like Haggard Park, and my backyard is huge and has a ton of lights so it worked out better,” Marshall said.

Marshall believes that there is no shame in taking homecoming pictures in the backyard, it’s close, less stressful for everyone involved, and incredibly easy to set up.

“The pictures actually turned out great, everyone in my group and I loved them, it was definitely worth the small set-up,” Marshall said.

Another benefit is the privacy a backyard offers, no strangers are going to be walking around in the background, and there isn’t any stress of blocking a walkway for people or other homecoming groups wanting to take pictures.

“Honestly, I think taking the pictures at my house was more fun than any park we could have gone to,” Marshall said, “We got a nice camera set up, and could act like complete idiots whenever we wanted to, which was often.”

Additionally, for groups compiled with different friend groups who don’t know each other well, this could be a great bonding experience to start off the night.

“All of us thought they turned out great, plus we got a few funny pictures from the mix, and made some great memories along the way,” Marshall said.