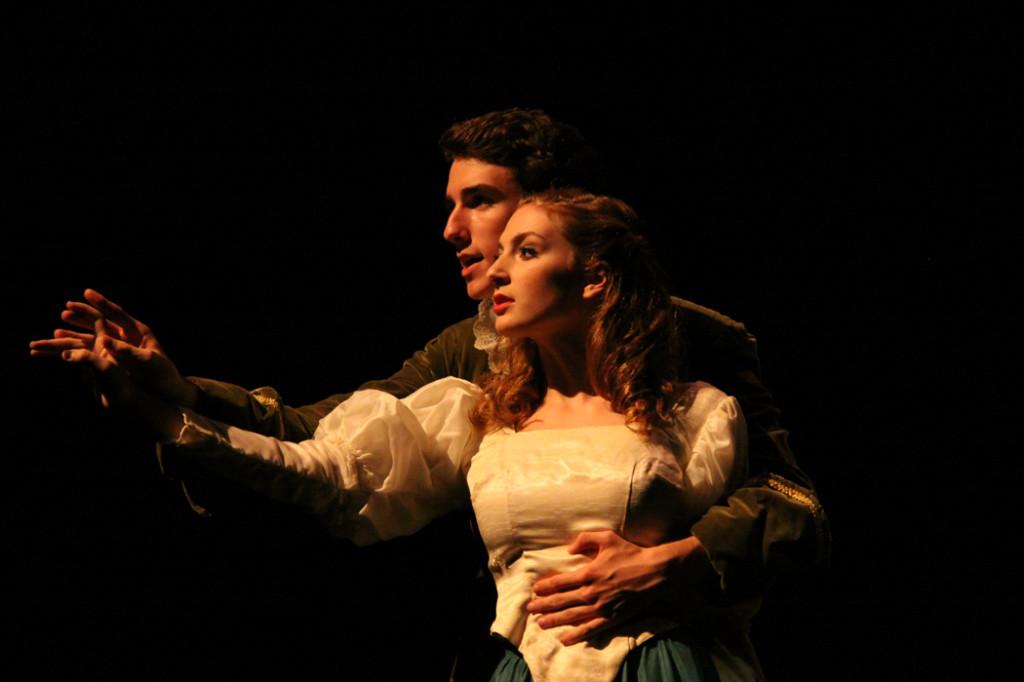 Electric saws hummed and the odor of paint filled the air of the fine arts building as the cast and crew of the upcoming play, Paganini, rehearsed and prepared for opening night. Paganini, written by Don Nigro, is a dark, twisted comedy based on the life of violinist Niccolo Paganini.

The cast and crew have been working since the beginning of the school year to make the play a success.

“It’s crunch time,” senior Jared Fletcher said. “We auditioned the second day of school and it’s going on next week. We have to get this ready.”

To audition, students had to prepare contrasting monologues, one classic and one modern. They also had to do a quote reading.

Senior Cam Wenrich got the lead role of Paganini, the bizarre violinist.

“I’m very grateful especially because this part is so much fun,” Wenrich said. “I’m also extremely excited to perform it for people.”

The off-the-wall character of Paganini provides Wenrich with a chance to be creative.

“Paganini is crazy,” Wenrich said. “It’s easy to be crazy but to also make it that dark character that people find funny is really difficult. Especially developing mannerisms to make him seem real is tough to remember, like ticks and movements of his hands.”

Overall, the actors are having difficulty being overdramatic.

“This whole play is supposed to show how Paganini seems normal compared to everyone else in his life,” Wenrich said. “Paganini is already crazy so people need to be like 10 times more crazy.”

The character of Paganini is supposed to play the violin, which has been problematic for Wenrich since he doesn’t know how to.

“I pretend to play,” Wenrich said. “I just have the bow not actually on the strings but hovering over the violin.”

The sounds of the violin will come from behind Wenrich.

“We do have someone from West in the actual production who is like a prodigy who will be playing the violin,” Fletcher said.

Fletcher plays the Clockmaker, an eccentric middle-aged man who creates clocks that come to life.

“I like playing him because it lets me have an experience where I do get to be crazy,” Fletcher said. “I don’t think I’ve ever had that before.”

Although Fletcher has played an old man before, he feels he can still practice and get better at acting like an older man.

“I have to work on movement and what kind of physicality he has,” Fletcher said. “I can’t be Jared Fletcher, 17. I have to be this man that’s middle-aged but also has a young heart.”

There are also aspects of Paganini that are unexpected, according to Fletcher.

“The clockmaker has a lot of ‘toys’,” Fletcher said. “One of the main characters is his daughter, but he has another daughter that is made of clockworks. So he has to wind her up.”

Although Paganini is far from a musical, the play embraces music throughout the show.

“It’s very music-orientated because it’s based on Paganini,” Fletcher said. “We have a lot of music in it and so one thing we were facing was people getting the handle of playing an actual violin.”

Since Paganini is based on a real person, the play is distinctive compared to other plays.

“The story is unique because it’s about somebody’s life, but it has such a different take on it,” Fletcher said. “I think it’s very entertaining to watch.”