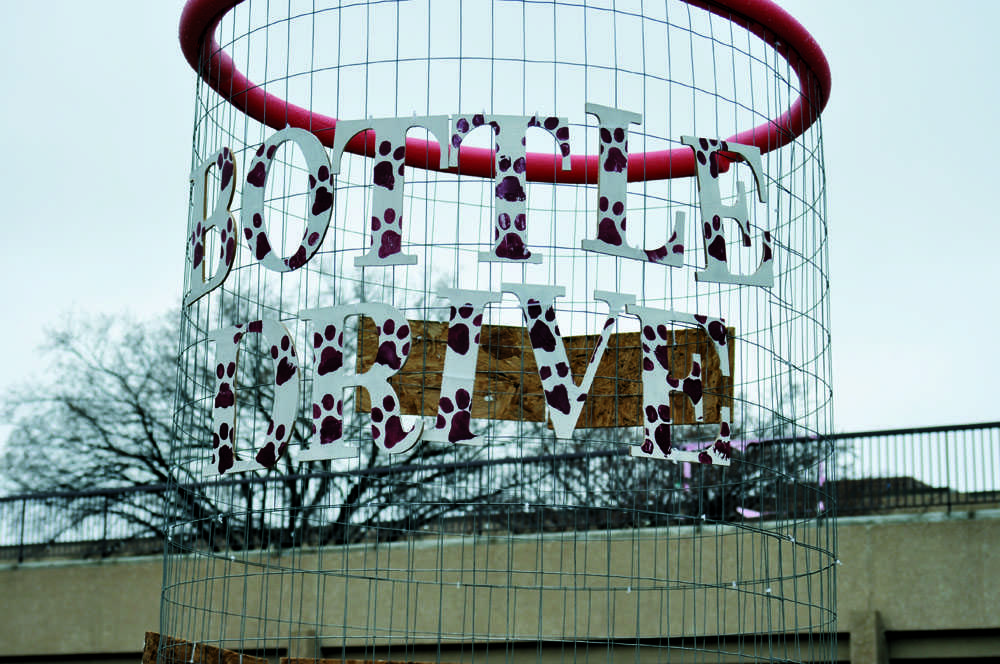 To encourage donations to the water bottle drive, Student Congress’ School Enhancement Committee installed little recycling cans throughout the school. All of these are regularly emptied in trash bags, hauled up a ladder and dumped into the giant tower looming over the center of campus. For the month of February, and possibly longer, these towers will stand as a reminder to recycle.

“We wanted it to be easier for people to just recycle,” junior chairman Bailey Patterson said. “It has positive effects on the environment, and we do get paid for recycling. Really negligible amounts, but the school still gets money.”
Last year’s bottle drive only collected about 500 bottles in one week, but it still increased the percent recycled from an average school week.

“The school district has stopped recycling because so many people threw trash in recycling bins and the city wouldn’t go through the time to sort it out,” senior chairman Austin Beaver said. “We hardly have any recycling containers.”
Patterson and Beaver have calculated that they want 650 bottles per week, or 2600 for the month. This is the same as one per student.

“We sized the tower based on that math,” Patterson said. “But after three days, I tried to gauge how many we had and it looked like he already had around 800, which is outstanding because we could potentially fill it by the end of the week. We didn’t expect that at all.”

Based on the amount of responses, members of Student Congress added to the tower to make it able to hold over 3000 bottles.

“There are just so many bottles,” Beaver said. “Every day, the smaller ones are overflowing. Every day, the trash bags are full.”

Administration is considering asking StuCo to run the drive all year.

“They were really impressed because we’re getting such a good response from it,” Patterson said. “We can visually see how many we’ve collected.”

In an effort to increase participation even more, all students will see a video during their 2nd period asking them to perform trick shots on the tower and email them to [email protected] Videos will be put on a youtube channel and voted on by Student Congress members. At the end of the month, the best one will win a $25 gift card.