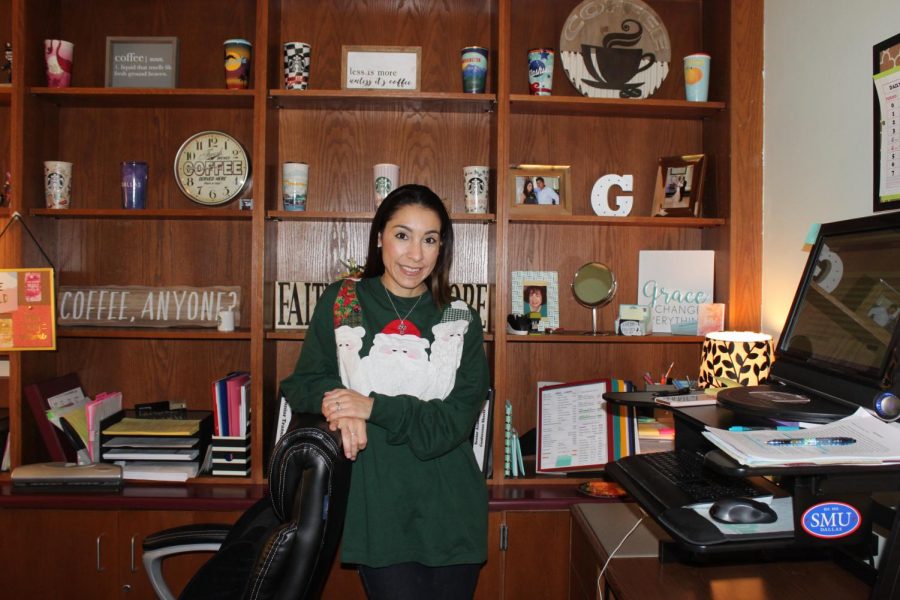 Counselor Grace Delgado is always present in her office for anyone in need.

Counselor Grace Delgado, one of the heroes on campus,  is always sure to be in her office, ready to listen to students and help them succeed both in and out of school, as she did for senior Nathan Rhodes, senior Veronica Rodriguez and junior Payton Sliepka.

“I dedicate myself to my students so they can get the help and guidance they need, not only with school matters, but with problems they may have outside of school as well,” Delgado said.

Delgado proves her dedication by working with students individually to put them on the best path for them. She makes sure students know where to find her if they need anything.

“Last year, I came in as a new student to Plano and then my uncle died unexpectedly in a car accident,” Rhodes said.

Delgado made sure that Rhodes did not feel alone in this trying period of his life.

“She got other counselors in to talk to me as well so I knew that I always had someone to talk to,” Rhodes said.

Throughout the year, Delgado also made sure that Rhodes would be able to graduate by encouraging him to get good grades and make sure he had an idea of where he wanted to go after high school.

“She gave me the confidence to try my best and helped me with my homework when I asked her,” Rhodes said.

Rhodes is not the only student she has helped. Delgado worked with Rodriguez to fix her schedule at the beginning of the year so that she would be able to participate in yearbook.

“I come from a Spanish-speaking family and Mrs. Delgado is the only person in the counseling center that speaks Spanish, so it was nice not having to translate for my parents,” Rodriguez said.

Delgado was able to successfully communicate with her parents and put her in yearbook so that Rodriguez could be a part of the staff. Rodriguez is now the sports editor for the yearbook.

“I’m so thankful that Delgado was able to get me into this class. I love my peers and everything I’m learning,” Rodriguez said.

Delgado is responsible for making sure students graduate, possessing the necessary skills they need to succeed in the real world and throughout the careers they are seeking. She assesses students’ goals and makes a plan to aid students in achieving them.

According to Plano ISD’s graduation statistics, in 2017, 97 percent of graduates from Plano Senior High school continued their education at either a four-year university, a two-year college or a trade school. Rhodes believes that these statistics are due to people like Delgado that push themselves as well as others to be the best they can possibly be.

This is not the only case that portrays how willing Delgado is to work with students and parents to make sure they take classes they will enjoy and excel in.

Delgado aided Sliepka in multiple ways at the beginning of the year to be sure he met all of his graduation requirements. She is the reason Sliepka is able to take his challenging AP courses as well as participate in extracurriculars, like varsity choir.