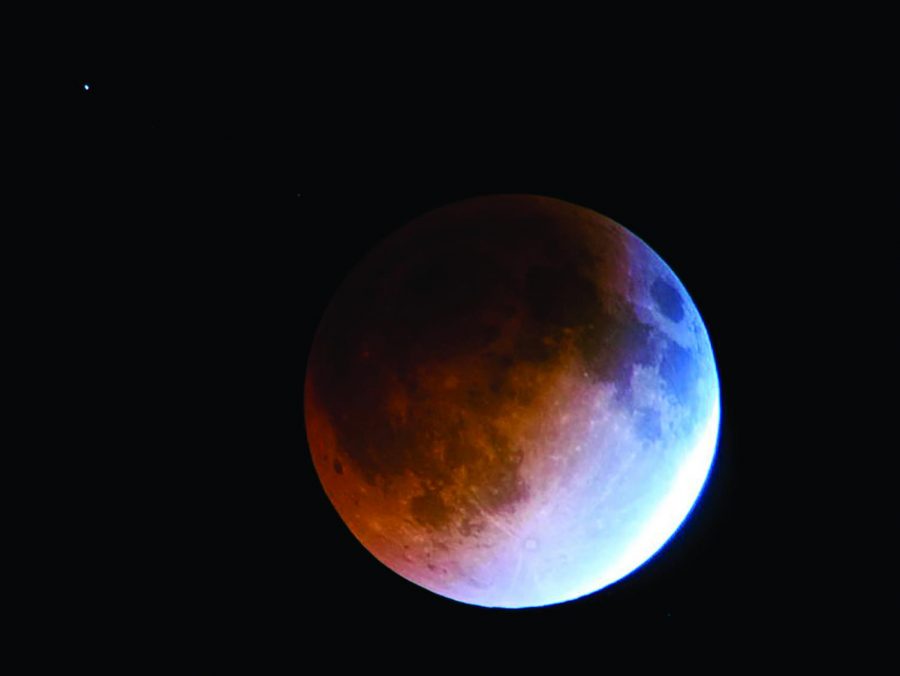 photo used with permission by NASA

Catch the Super Blue Blood Moon on Jan. 31 for the first time in 150 years.

The Super Blue Blood Moon is a astronomical phenomenon that will be visible on Jan. 31 throughout most of the Midwestern and Western states for the first time in 150 years, Space.com said.

The event is the combination of three much more common occurrences: the lunar eclipse, the blue moon and the supermoon.

“This is an exciting event that has not been seen since your great great grandparents were children,” president of City Lights Astronomical Society for Students John Wagoner said.

According to Space.com, the lunar eclipse, on average, happens about two to three times a year, when the moon passes behind the Earth into its umbra. This causes the Earth to block out the sun, leaving the moon in the planet’s shadow, while the Sun, Earth and Moon align with the Earth in the middle. Because of this alignment, the sun’s red light rays bend around Earth’s atmosphere and reflect on to the moon, which, when red, is referred to as a blood moon.

“They happen about once every 2.7 years,” NASA’s public communications office said.

The last piece of the phenomenon is the supermoon. A supermoon happens when the moon approaches its closest orbit around the Earth. This happens about four to six times every year.

“Most days the moon is nearly 238,855 miles from Earth, but during the supermoon it will be approximately 223,068 miles away,” NASA’s public communications office said.

This causes the moon to seem 14 percent larger, and 30 percent brighter.

Some good viewing spots in Plano would be Liberty Park on 1200 Mill Valley Road or the fields behind campus on 2200 Independence Parkway.

“I can’t wait to see this awesome event,”  junior Sami Tufford said. “I’ve been excited to see it since I first heard that it was happening.”