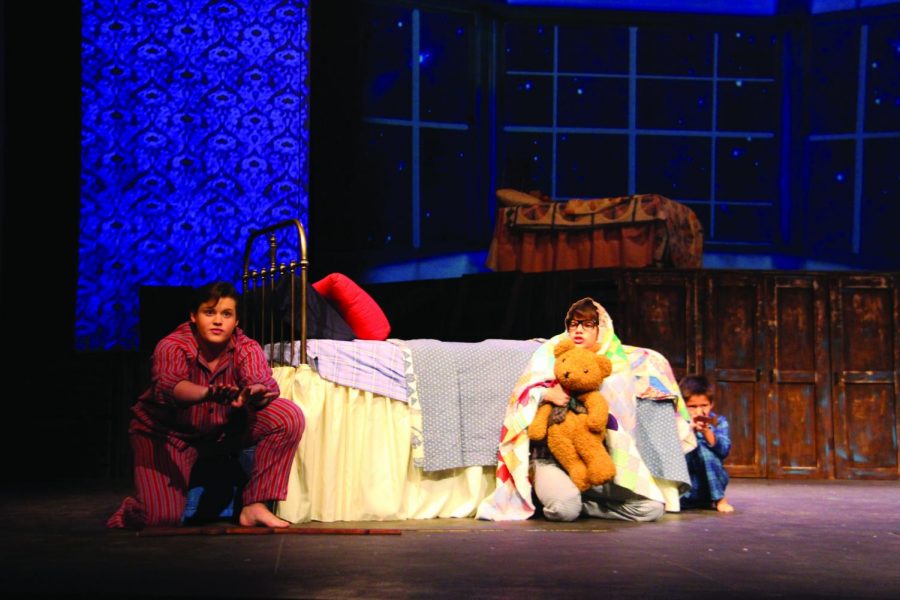 The play revolves around the story of how Wendy first met Peter Pan and their adventures together in Neverland, with Wendy desperately searching for her little brother, who had passed away due to illness, while Peter tried to show her all the fun in the world that she could still have. Along the way, Wendy and her other brothers went on a series of thrilling escapades, encountering everyone from the playful Lost Boys to the vengeful Captain Hook and his crew. And, of course, Peter and Wendy grew closer and learned from each other.

“The script really challenges everyone, including the audience, to use their imagination,” theater director Racey Ballard said. “The author takes you on a heartwarming and adventurous journey.”

Preparation for the play definitely wasn’t easy, especially considering the time constraint the cast was under.

“We worked on this show for two months, which isn’t a whole lot of time to prepare a show as physical and dynamic as this one,” senior Neda Ghassemi, who played Wendy, said. “But everyone put in so much hard work and dedication to get it to where it was.”

The cast and crew not only put out a beautiful show but they had fun while they did it.

“I had so much fun with the other cast members and all the memories we’ve created from staying till 10,” senior Nina Gurgenidze, who played a lost boy named Curly, said. “It honestly felt so empowering having a powerful female lead show.”

The theater crews has special rituals that they perform in order to build up their teamwork and psych themselves up with enthusiasm. One prominent activity would be their “magic circle.”

“Magic circle is a time to share what the experience has meant to us and give thanks to one another,” Ballard said. “Technicians and actors could not bring to life such amazing stories without one another.”

With a show as beautiful and well thought out at this the cast and crew had to be 100 percent invested in what they were doing.

“There was a lot of ensemble work because we had to literally make people fly,” senior Riley Bautista, who played ensemble and Knock-Bone Jones, said. “This was definitely one of the most crazy shows I’ve ever been a part of.”

Not only did the ensemble carry the main characters around to let them fly through the stage, but they had harnesses that attached to Wendy and Peter to let them fly without the help of people. With this aspect included, the show did not come without its fair share of obstacles.

“The night that sticks out the most is definitely the first night when I didn’t get clipped in to fly,” Ghassemi said. “But Peter was an amazing scene partner and improvised with me, and despite it not going correctly, it ended up being one of the best moments of the show.”

Preparing for the show also entailed a lot of physical labor, which proved to be a challenge.

“For the next play, I’d like to get in shape so I’m less tired during the performance,” senior Maci Dismuke, who played Tiger Lily, said.

Despite the small hurdles, the cast and crew were able to enjoy their experiences performing and put on a good show.

“I remember one night I was watching the opening scene and just started to cry,” Ballard said. “I could tell they were having so much fun on stage with one another. I was one proud director.”

There is still a lot more in store from the theater department after Wendy and Peter Pan.

“Next, we are putting on a Macabaret night, which will be featuring various performers and Halloween-themed songs,” Ghassemi said. “We also have our musical, Chicago, that will be showing next year. You’ll want to be sure to be there!”