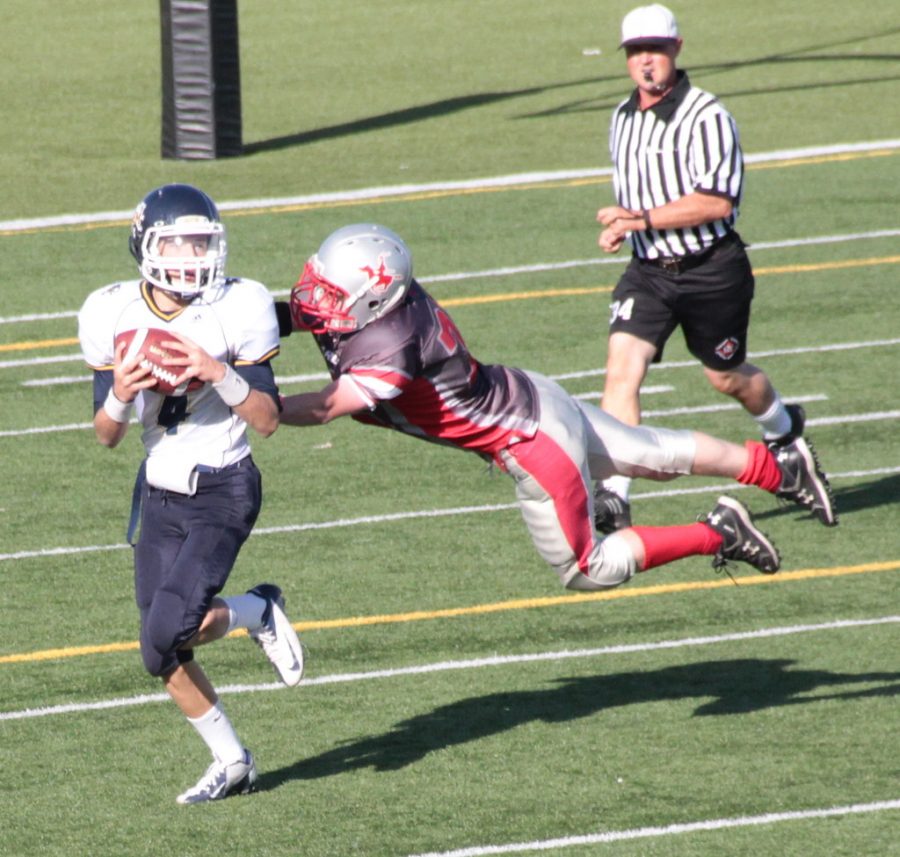 Unsafe tackles have the ability to seriously harm football players, all precautions should be taken.

This year introduces a new mouthguard sensor called Sisu Sense from Akervall Technologies, which is an electronic device used to detect head impacts that can hopefully bring a new level of safety and caution to the football industry.

The device includes three accelerometers which detect linear impacts to the head, but doesn’t diagnose injuries or replace concussion protocol. The information is transmitted through the use of Bluetooth to an accompanying smartphone app that analyzes and organizes the data. It includes a large battery that can last up to six months without a recharge.

Additionally, the mouthguard is notebly helpful for injured players to receive the necessary medical attention for hard hits. The players and staff do not have to check for symptoms or indicators of high risk injuries such as concussions, which are a major problem in football. The use of the mouthguard is not just being applied in the NFL, but in high schools where the injuries start.

This is a major strive forward for football because most of these injuries are left undetected, yet there’s now specific procedures that could treat them as fast and effectively as possible. There should be a greater emphasis on player safety and precautions to prevent any injuries from going unnoticed like in the past.

The best aspect of the mouthguard implementation is that information on the impacts are sent to medical staff immediately to determine if they demand full attention. The players and their respective families are given accurate information about the hostility of the specific head or dental injury.

Younger high school players are the ones to receive the most benefits as their bodies are still developing and not as damaged as their older counterparts.

Concussions are still a major problem plaguing the football industry and the new mouthguard doesn’t immediately solve that, but it still helps with any impacts to the player’s head. This new mouthguard is a necessity and any game without it should either be banned or immediately notified to include them.

Dr. Micheal McCrea worked alongside Dr. Brian Stemper on the new mouthguard sensor. He said that the new sensor strives to characterize head impacts in contact sports like football. They want to witness how many hits a player gets, the impact types and severity of those hits.

The mouth guard has the thickness of a 50 cent coin and provides a custom fit for the athlete. The thermoplastic polymer material acts as a strong barrier protecting their teeth.

A study of highschool football players by Steven Rowson, the center for injury biometrics, said there are four million undiagnosed concussions every year. These injuries result in over one million ER visits and prominent socio- economic struggles for athletes. The impact of high level injuries is more extensive than the public realizes and giving the new mouthguard to players won’t just benefit them on the field, but their entire lives.

This new technology is not only helpful to the players physically, but useful psychologically as the mouthguards make them feel more comfortable and at ease when on the field. Many head injuries cause more pain on the inside as well as outside so their inclusion is going to invoke beneficial changes. The use of the mouth guards should be a major priority in football and every game should have them no matter what.

Lastly, there’s expectations that the new Sisu Sense mouth guards will convince athletes to avoid overly dangerous situations in sports such as football. This could hopefully lead to changes in the rules of contact sports that maintain the popular aspect of witnessing players tackle each other while monitoring for intense injuries.

This new mouthguard could not just add an extra level of caution when it comes to procedures for impact injuries, but end up saving lives in the long run. The rapid implementation of the mouthguard stands to succeed in high school football teams and could hopefully lead to greater safety for players.