Annual “Stay Day” lives up to the hype 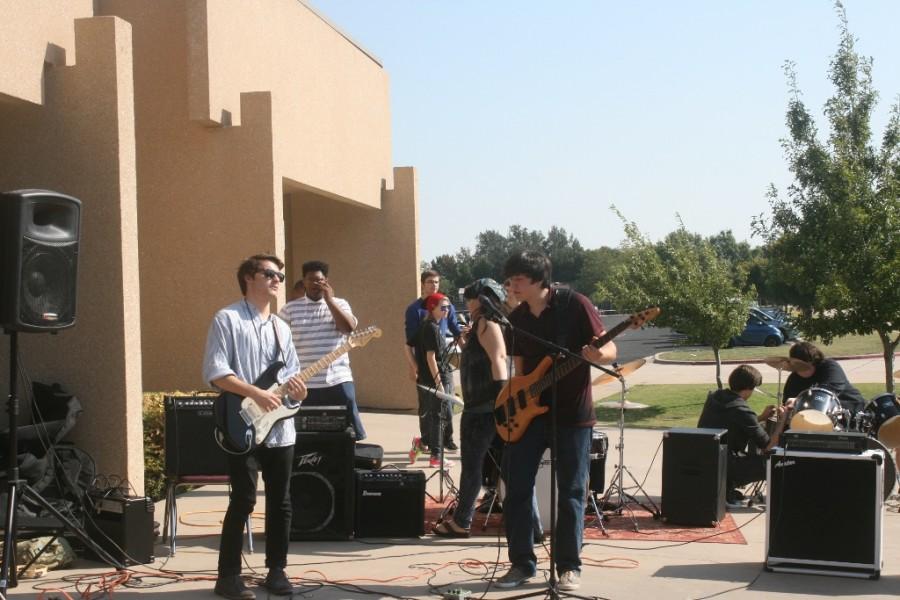 The band Ocean Fiend gathers a crowd as they play just a few of the many songs they have been working on.

As I approached the pond, the sound of tropical music from a close-by snow cone stand filled my ears. The aroma of food that hung in the air made my stomach rumble — I was ready for the long-anticipated Stay Day.

As a junior, I had heard about Stay Day but wasn’t quite sure what the event was all about. I knew that Student Congress was the main organization in charge of the occasion, but I had little knowledge beyond that.

“It’s an idea we came up with a long time ago and it’s basically an environmental project,” Sayeef Huq, senior chairman for student enhancement said. “Since everyone has off campus lunch and drives to their favorite restaurants with friends, we figured why not bring the restaurants to them so they can save gas and cut back on pollution?”

Hearing that the event was designed to help decrease pollution made me that much more excited for it. It was refreshing to see the members of so many clubs get together and be passionate about making this event great for an important cause. The environmental aspect behind the project turned my idea of it being about eating yummy food into something more important.

I was delighted to see how everyone’s hard work had paid off. It was clear that a lot of effort was put into making sure the students had a wide variety of food to choose from, along with other activities.

Games like “Guess how much candy is in the jar” were classic and fun. Even DECA got in on the action with raffle tickets that offered the winner free cookies for an entire semester. The activities set up were a good way to keep students entertained while helping the school organizations earn some money.

Even though rumors floated around that Stay Day might not have happened this year, Student Congress representatives said they had less problems than they anticipated when they started setting up the event.

“There were actually fewer requirements than in previous years,” Huq said. “We used to have to get food permits from the city’s health department but that is no longer a necessity. We still encouraged everyone to stick with the rules and have hair nets and gloves to make sure we don’t have to go back to the old, more pain-staking requirements.”

Even though the demands for Stay Day were more relaxed I really felt like everything was well kept and sanitary as I made my way through the maze of food trucks. Not only were they clean, they were delicious. I thoroughly enjoyed the chili cheese dog and Italian ice I got as my main meal, but the bites of funnel cake, pizza and Panda Express I stole from friends’ plates were just as tasty.

One thing that was a little disappointing was the lack of outside seating. While there were the usual picnic tables, they filled up fast. Since it was such a nice day I didn’t want to sit in the cafeteria, but I was not too fond of sitting on the ground, either.

While I wished there were more places to sit, it was nice to walk around and listen to the live music. The band Ocean Fiend gathered a nice crowd, as did the jazz band. Having live music really added a bright feel to the environment.

Overall, I found Stay Day to be a great success. The details that were put into making the event enjoyable for everyone really paid off and were apparent as I walked around the pond. Among the many traditions the school has to offer, Stay Day is definitely on my list of favorites.