Wildcats Step up to the Plate 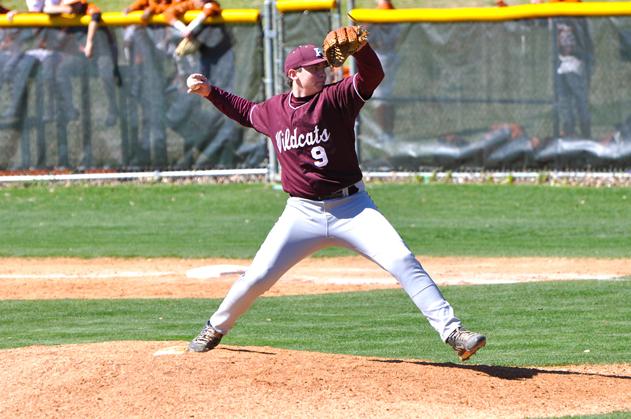 After what head coach Rick Robertson said was a solid run of games to begin the season, the baseball team is preparing for its second tournament at South Grand Prairie March 1-3 against five different schools from around the area.

In the Feb. 23-25 tournament at Naamen Forest High School, the team won three of four games. After the South Grand Prarie tournament, the team will have one more tournament, the Tournament of Champions, March 8-10. The team will play Frisco Centennial, Liberty Christian and Colleyville Heritage, and then it will begin its district games. Robertson said he already has big plans for the team.

“Our goal every year is to win a district championship and advance deep into the playoffs,” Robertson said.

The boys practice daily after school and starting March 13 will have at least two games every week. During practices they scrimmage, run drills and work on improving their skills and becoming better players. In order to be able to play in every game, all athletes must keep a certain grade in each class, so they work to balance their academics and baseball.

“Our coaches have been focusing on producing athletes during practice, but also re-administering the ‘student’ portion of the ‘student athlete’ outside of practice,” junior Michael Crawford said.

Robertson said there is a great possibility that the 13 returning seniors and the new players will improve the team’s records and potentially set new ones.

“It’s clear all these players have worked year round on their game to improve their skills and their strength,” Robertson said.

Crawford said the team has a lot of potential this year.

“We have a lot of experience throughout our lineup as well as some very talented freshmen and sophomores,” Crawford said. “Hopefully we can all mesh and win some games.”

Crawford, who has been playing on the team since his freshman year, said baseball had been an important part of his life, for a long time.

“I fell in love with baseball as soon as I started playing,” Crawford said. “Ever since then my goal has been to play for as long as I can.”

Crawford said he’s tried out year after year in hopes of making it and being seen by a scout and playing in college.

“Hopefully I do well enough throughout the next two years so that a college will want me,” Crawford said. “I contribute a lot of my free time to work on improving, and I plan on doing so as long as possible.”

Since joining the team his freshman year, Crawford said he has further developed his skill and has had great experiences.

“During the playoffs last year we overcame a 5-0 deficit and defeated Southlake 9-5 in the last inning, and followed up with another win the next day to sweep them,” Crawford said.

As the season progresses, the boys will continue to practice and Robertson said he hopes to get many wins. Crawford said he is excited for the year and is glad to have the chance to play again.

“My favorite part of being on the team is having the opportunity to represent my school by playing the game I love,” Crawford said.

Come support the Wildcats at the next home games: