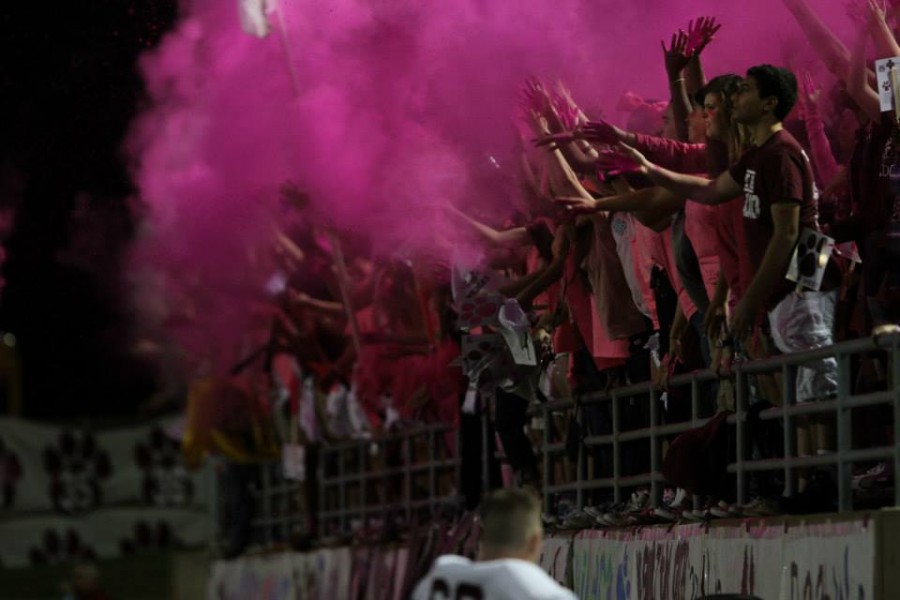 Overcoming long-shot odds and a multitude of penalties throughout the game, the Plano Senior Wildcats edged out a 17-14 victory over rivals Plano West at Clark Stadium on Friday night, earning their fourth win of the season in the process.

The Wildcats, not favorited to win against the Wolves, started out with explosive plays to begin the game before the contest became bogged down with penalties on both sides of the ball.

That explosiveness was highlighted by Plano Senior’s first score of the game, a 37 yard touchdown run by RB Lopaka Yoro on a trick reverse play that had the Plano West defense scrambling and unable to catch the diminutive but speedy Yoro, with the accompanying PAT by Tyler Brogan giving the Wildcats an early 7-0 lead in the 1st quarter.

The Wildcats then continued their fast start by playing swarming defense as well, notably pressuring Plano West QB Robert Colmery with blitzes and stifling star Plano West RB Soso Jamabo, who appeared hurt in some form for most of the game.

Plano Senior’s offense seemed to feed off this positive play from the defense, soon extending the lead to 14-0 courtesy of a short touchdown run by RB Brandon Stephens early in the 2nd quarter. Brogan again tacked on the extra point to give Plano Senior a rather shocking 14-0 advantage before halftime, with the Wildcat student section voicing their appreciation in no uncertain terms.

Plano West did mount a response before the halftime interval in the form of a score from the aforementioned star RB Jamabo, who stayed in the game during its entirety despite his apparent injuries. The score, a power rush up the middle from a few yards out, pulled Plano West to within one score at the break, with Parker Davidson’s PAT more specifically making it 14-7 at the half in favor of Plano Senior.

The Plano West score at the end of the first half was set up in part by a big play defensively, as the Wolves picked off Plano Senior QB Quinn Waterbury for the first of what would be two INTs thrown by the junior on the night.

Other than the score aided by the defense, the Plano West offense was incredibly and unusually stagnant during the first half with neither the RB Jamabo nor the QB Colmery producing much in the way of big plays, a category that one would think pre-game seemed to vastly favor the home team (Plano West).

Penalties, a common theme throughout the night, didn’t appear to get better after the 30 or-so minute break, with both sides actually appearing to draw more yellow laundry from the officials in the 2nd half, a fact not helped by the officials calling a very tight game on the playing field.

Scoring was at even more of a premium in the 2nd half as well, making it all the more crucial when Plano’s Brogan nailed-in a short field goal attempt late in the 3rd quarter to make it a 17-7 advantage to the Wildcats.

The game, which had gotten the slightest bit mundane after the break, then began to liven up in just about every way imaginable as Plano West incredibly ended the 3rd quarter with three un-timed downs following back-to-back-to-back defensive penalties on the Wildcats.

This string of illegal acts by Plano Senior did not manifest itself in the form of points for Plano West, as a 47 yard field goal attempt was missed soon afterwards by the kicker Davidson, leaving the Wolves still down 10 points with 11:14 remaining in the game.

Plano Senior, needing to run some clock and salt away the game at this point, was able to do neither as the RB Stephens was stuffed by the Plano West defense on 3rd and Inches, forcing Plano Senior coach Jaydon McCullough to call out the punt unit with just over nine minutes remaining.

The Wolves, in desperate need of points in a short amount of time, accomplished their goal reasonably well as they underwent a methodical drive down the field which culminated in QB Colmery’s 6 yard touchdown scamper to make it a ballgame again with 6:30 left to go and Plano Senior now clinging to a 17-14 lead.

The drive, noted for Plano West’s score to get back into the game, also featured an unusual instance in which Wildcat DT Connor Welch was ejected from the game for a personal foul helmet contact penalty towards a Plano West player.

Plano Senior, getting the ball back with 6 1/2 minutes to go, were not able to prevent another Wolfpack possession as they went 3 & out with the Plano West defense rising to the occasion, specifically DT Shantus Smallwood who both tackled RB Stephens for a loss and pressured QB Waterbury into a key incompletion on 3rd and 9.

This gave Plano West the ball at their own 30 yard line with 4:43 remaining on the clock, the Wolves needing to go 70 yards in under 5 minutes to steal the victory away from Plano Senior.

What then played out couldn’t have been further from their desires, as the Wolfpack offense duly went 3 & out themselves, never to touch the ball again the rest of the game.

Plano Senior took over with 3:51 left and then bled out the rest of the clock, with key runs from both Stephens and Yoro sealing the deal on the Wildcat victory.

The Plano Senior victory, ever the more important over a rival like Plano West, looks even more impressive when factoring in the 21 Wildcat penalties accumulated over the 48 minutes of game time action. It therefore appeared fitting that the game was to end in such ugly fashion, as Plano Senior suffered a final five-yard Delay of Game penalty with 0:01 left in the game as QB Waterbury kneeled down several times to finish off the win.

Despite their frequent mistakes, Plano Senior coach McCullough was more than pleased with the surprise victory for his team under the lights at Clark Stadium.

“Nobody picked us to win this game,” McCullough said. “But I feel we play better when we’re the underdogs.”

That sentiment held true on Friday night, with the Wildcats ever embracing the underdog spirit in their narrow and prized victory.