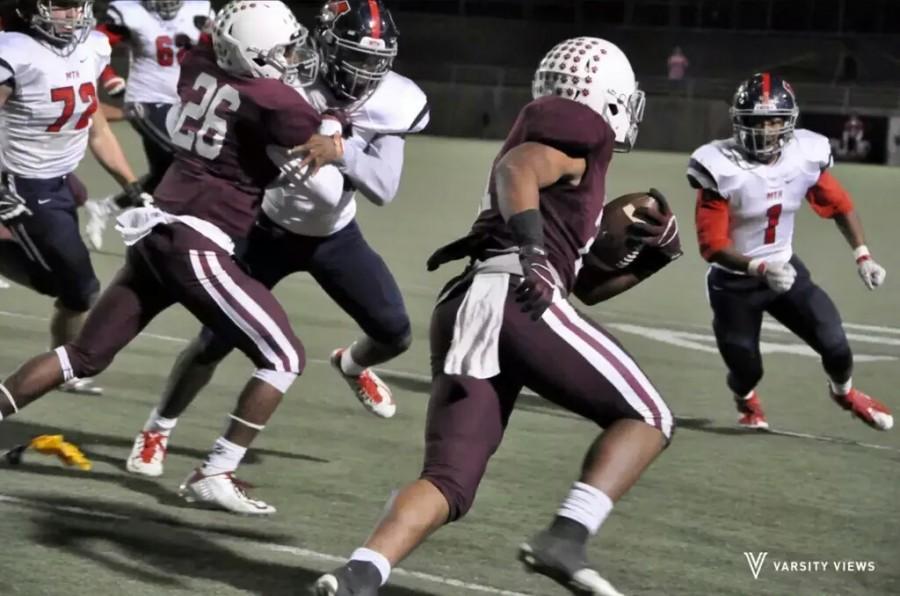 Plano junior Jacoree Sanders returns a fumble during the 21-7 defeat at home to McKinney Boyd. (Photo by Varsity Views)

Ineffectiveness and an inability to take the opportunities presented to them marred the Wildcat offense again on Friday night, as Plano slumped to a 21-7 Homecoming game defeat to the McKinney Boyd Broncos.

The Wildcats opened the game with two consecutive third down conversions on runs from senior quarterback Matt Keys and senior running back Brandon Stephens. However, their drive soon came to an end at midfield as Keys was intercepted by the Bronco defense.

Plano responded positively to the seven point deficit as the Wildcat offense engineered a methodical 15-play drive down the field. Pass completions of over 10 yards to senior wide receivers Garrett Frederick and Daniel Rodriguez helped to extend the lengthy and time consuming drive.

Keys capped the drive by running in for the touchdown from one yard out, his sixth rushing touchdown of the season. Junior Blake Mazza added the extra point, tying the game at seven late in the first quarter.

McKinney Boyd’s second possession was aided by a facemask and offside penalty on the Wildcats, allowing them to keep hold of the ball. Runs by Restmeyer and junior running back Kaeden Markham moved the ball to the Plano 18, where junior defensive back C.J. Wall ended the Bronco drive with an interception for Plano.

Unable to produce points from the turnover, Plano flipped field position on McKinney Boyd after a 53-yard punt by senior Kaleb Gete. The score momentarily became 13-7 in favor of the Broncos after a 40-yard touchdown pass by Restmeyer, but an ineligible man downfield penalty negated the score.

After Plano was pinned at their own one yard line following a punt, a 14-yard completion from Keys to senior wide receiver Ryan McConnell provided the offense with some much needed breathing room. The halftime whistle blew shortly afterwards, with the game still tied 7-7.

The Broncos received the second half kickoff and worked their way to the Wildcat red zone, but lost possession as Restmeyer fumbled the ball away on a running play. Junior linebacker Jacoree Sanders recovered the fumble for Plano with 8:44 remaining in the third quarter.

For the second time of the night, Plano was unable to take advantage of a forced turnover as they again went three-and-out offensively. Similarly, the Broncos had a second touchdown pass negated due to penalties on their following possession, with a 67-yard screen pass from Restmeyer to Bowling wiped out for holding.

It would matter little, though, as the McKinney Boyd offense marched down the field behind pass completions of 19 and 10 yards to Bowling. The Bronco lead was then restored as Markham ran in from eight yards out for the touchdown to make it 14-7 with 4:33 left in the third quarter.

In truth, the outcome of the game was determined on the following offensive possession by Plano, their sixth of the game. Beginning at their own 35 following a kickoff out of bounds, the Wildcat offense compiled together several big plays in an effort to tie the game.

A 17-yard rush by Stephens, 10-yard pass to Rodriguez and a 15-yard pass to Frederick all played a part in the Wildcats working the ball down to the McKinney Boyd 10. Plano would end up running four plays from inside the Bronco 10, including a fourth-and-goal play from the one yard line, but was unable to come away with any points.

That critical fourth-and-goal play saw Keys run a quarterback sneak to try and score again from one yard out, but he was met by stiff resistance from the Broncos as the play went for a loss of four yards. McKinney Boyd then proceeded to put the game on ice with an eight-play, 97-yard scoring drive.

Chances of a Homecoming comeback for Plano were thwarted as Keys was intercepted for the second time by senior defensive back Armani Jenkins on the next Wildcat possession. Plano would get one more possession down by 14, but was unable to convert a fourth down and six to prolong the game.

The loss drops Plano to a 3-5 overall record on the season, with their District 6-6A record now standing at 1-5. The win sees McKinney Boyd improve to 3-2 in district and 4-3 overall, putting them third in District 6-6A, five spots ahead of Plano.

After three straight losses the Wildcats now have a bye week before visiting Flower Mound Marcus on Oct. 30.