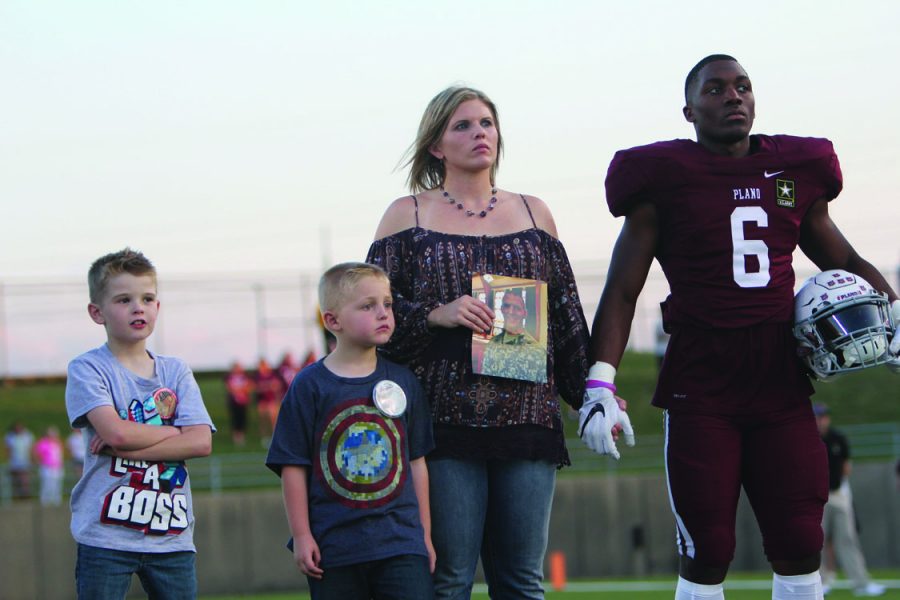 For the past five years, the school has honored locals and alumni who have served in the armed forces with the annual Maroon Out for the Military football game.
“These are people in our own backyards,” Subschool Principal Bryan Spiritus said. “We have to focus on the people right here.”
This includes honoring Plano Senior alumni such as Captain Eric Zastoupil. He graduated with the class of 2006 and is known for being captain of the basketball team that went to the state championships that year. After graduating, Zastoupil joined the army and served in Afghanistan. While there, Zastoupil experienced injury.
“I was originally in the infantry. Then I got blown up in Afghanistan and lost my leg,” Zastoupil said.
Following these events, Zastoupil remained in the army and transferred to the Cyber Warfare Battalion where he became captain and operations officer of 650 men.
Every year, the ceremony to honor the veterans changes. At this year’s Maroon Out for the Military game, Spiritus said that the procession on the field was inspired by the Panthers in the National Football League. The Panthers honored families of fallen soldiers by giving each family a helmet. Since gifting a helmet to each family honored at the game was not in the budget, Spiritus and his fellow administrators devised a more affordable option.
“We decided to get the names of the fallen soldiers stitched onto the jerseys,” Spiritus said.
This option was made possible because of donations from the Collin County Marine Corp League. They raised $2,500 specifically for the school to use to set up the event. The time frame also factored into choosing to stitch names onto the jerseys. It was a home game right before an away game and a bye week. This meant that there would be enough turn around time to remove the stitching from the jerseys before the next home game.
The idea goes beyond just stitching names and patches of service onto the football jerseys. After being removed, the names and patches would be delivered to the families of the fallen soldiers.
Some of those families happened to be present for the game and were escorted onto the field by the player wearing the name of their fallen loved one. Varsity football member junior Seagol Mbua received the family of First Lieutenant Robert Welch III for his second Maroon Out for the Military game.
“I walked out with the widow of Robert Welch III and their two sons,” Mbua said. “It made the situation feel even more special knowing that I got the opportunity to meet the family and share that moment with them.”
The day before the ceremony, Sergeant Stephen Jackel spoke with the football team. He shared his story of his amputations and brain injuries with the players to remind them of the hardships of being in the military.
“He made me realize I take so many things for granted in my life and also that we do not appreciate our military enough,” Mbua said. “Without the men and women who serve our country, that game Friday night against MacArthur or any other game would not have been possible.”