Football still has goal of playoffs in sights 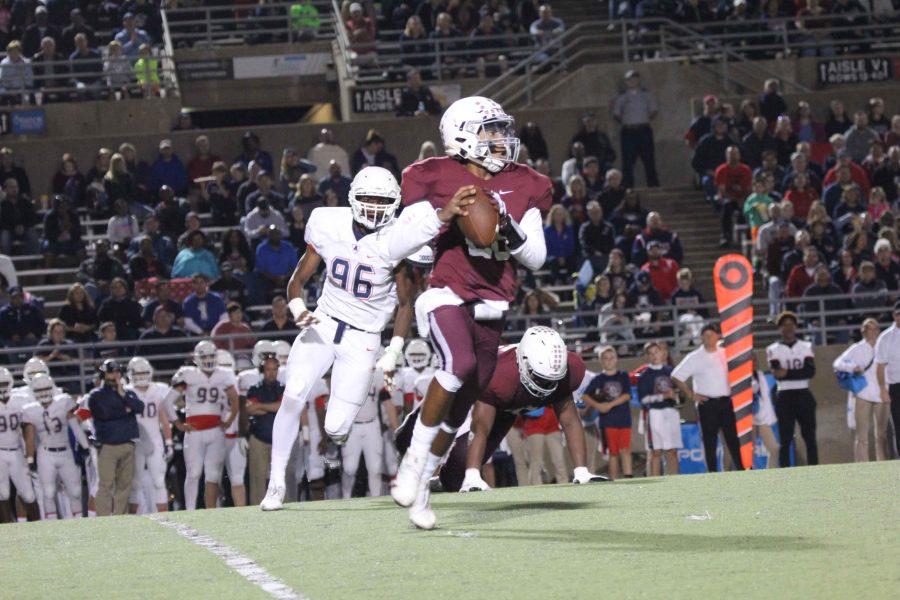 Heading into week six, the varsity football team looks to prevail past their first four losses and play harder than ever to work their way towards the playoffs.
Plano has now lost four games in a row, and stands with a record of 2-4. Although the team is 2-4, they still have confidence that they can make it to the playoffs. Senior guard Gerard Wheeler, along with the rest of the team, is working nonstop to reach their goal.
“We are working on executing every snap to perfection,” Wheeler said. “We try to make sure everyone is doing their job and staying close as a team”
In the fourth game of the season, Plano played Denton Guyer at home, losing 34-24, with sophomore running back Kyron Cumby running for 18 carries, 129 yards and two touchdowns. Plano lead 13-7 in the first quarter but shortly fell losing the lead 21-16 at halftime. At the end of the third Denton Guyer lead 27-24, scoring one more touchdown in the fourth for a score of 34-24.
In week five, Plano played the McKinney Lions and lost 31-28 with senior quarterback Aaron Ragas throwing for 206 yards, two touchdowns and two interceptions. In the first quarter, Plano was up early 7-3 but got scored on twice to bring the score 17-7 at halftime. Through the third and fourth quarter plano scored 14 more points, but McKinney scored 14 points as well to win by just three points with the score 31-28.
Assistant coach Marcus Richardson says that he wants the team to move forward from these losses. Looking back on a loss from last week can impact a player’s performance greatly, so it is important to keep going after a loss and focus on the next week moving forward.
“After a loss we have a 24 hours rule. we will come in that next Saturday morning and watch film about all the things that we did both right and wrong,” Richardson said. “It is important that we keep encouraging the kids and make sure they have a positive attitude.”
It all starts off with the coaches and the leaders of the team to make sure that everyone has the right mindset and outlook going forward to the next game. Even after a loss, no matter what happens, it’s important to strive and move forward as a team and as a family.
“We try to keep the tempo up at practices and keep their spirits up,” Richardson said. “That all starts with us coaches and the leaders on the team. Whether we win or lose, we’re still gonna try and get better both towards football and life.”
The following week, the team played Allen at home, losing 38-15 with senior quarterback Aaron Ragas throwing for 161 yards, two touchdowns and one interception, in addition to rushing for 47 yards on 13 carries. In the first quarter Plano held Allen, the number four team in Texas, to 7 points while Plano scored none. Yet shortly after in the second quarter Plano scored a 31 yard touchdown and a two point conversion to gain a lead for the first time at 8-7. At halftime the score was 24-8 with Allen leading. Through the last two quarters Allen scored 14 more points with Plano scoring one more time in the fourth with the final score 38-15.
Senior quarterback and wide receiver Brendon Palmer describes the difficulty of losing four games in a row. When a team loses games it is important to use those moments as a way of teaching instead of a moment to be angry.
“It is hard for any good team to lose four games, but it is also a part of football. You learn to lose before you can win,” Palmer said. “Of course the team thinks about it, but we think about it as a lesson, a teaching moment, not a loss, and that keeps us focused.”
Although the playoffs are a long way away, they are still the number one goal for this team. The closer it gets to playoffs, the harder the team begins to work both in in practice and during games.
“All year long, we’ve been working our tails off,” Wheeler said. “As the season goes on, we will be on edge to play harder, but our work ethic will always be to play every game like it is our last.”
While playing football, there are many obstacles that stand in the way for a team, such as injuries, tough teams, and unpreparedness. Wheeler believes that their biggest obstacle is not the other team, but something else.
“Our biggest challenge is to not let other people and what they have to say affect us as a team.” Said Wheeler
Practices are an important part of the game and a key to success. Without practice there is no way for team to get better and closer together. Senior tight end McKenzie Solsberry talks about how hard the team practices.
“I think practice is the most important thing because it helps us out on Friday nights,” Solsberry said. “Everyone on the team practices hard, and we try to make everyday a good practice. Without that I don’t know where we would be.”