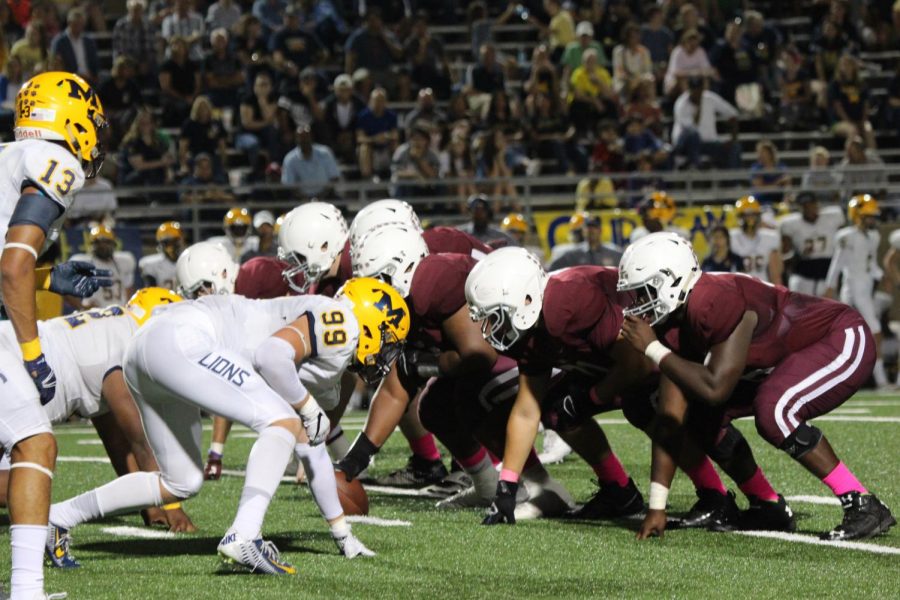 The Wildcats face off against the McKinney Lions Oct. 6 at home.

In a disappointing turn of events, the varsity football team racked up their first two losses of the season after starting off with four wins, their first being against McKinney high school, 21-24.

“We just needed to play with energy. We beat ourselves, not the other team,” senior player Daniel Tolliver said.

In the first quarter, McKinney had a 70 yard pass and scored a touchdown at 11 minutes 20 seconds until end of quarter. For the rest of the first though, not much happened besides runs, leaving the score 0-7.

Within the second quarter McKinney did a good job of limiting Plano from getting any ground. In the midst of the second quarter, senior Kaleb Macaway caught a jump ball for a 36 yard gain. In a seemingly pivotal turn of events, the Wildcats made up for it with two touchdowns, which raised the score 14-7 putting the team in the lead.

Plano started off with the ball, but the second half of the game is when it started to go downhill for them.

“I feel like we played good the first half. We had a good drive going, but the second half we lost our momentum, and we had trouble getting it back up,” junior player Jack Alexandre said.

Plano managed to punt past midfield, only to have McKinney advance to the Wildcats’ 40 yard line. By three minutes and 33 seconds, McKinney scored another touchdown, and took back their lead with a score of 14-17.

“In the second half we had trouble moving the ball,” McCullough said. ”We could’ve executed or made plays. We definitely could’ve done better.”

Fourth quarter proved to be tense, but with a disappointing end. A McKinney player got injured, and right after scored a touchdown. This left some fans thinking that Plano was out of answers as the Lions completely smothered the Wildcats’ run game.

At this time, hopes rose a little for Wildcat fans as McKinney fumbled the ball, and then ten seconds later Plano made an amazing 70 yard punt return and scored a touchdown, which brought the score up to 21-24.

“When they got a fumble for six we picked up the energy,” Tolliver said.

Around four minutes until end of game is when hope started to go down for the Wildcat team. Two of Plano’s players got injured, and they called two timeouts. Meanwhile, McKinney called one time out at 30 seconds left, right before Plano made one last attempt and did a great throw, but not in time as the clock ran out.

“We have to be much quicker about plays in a short amount of time, and when players aren’t going at their best and they keep getting beat, it’s hard to get back up to their top,” Alexandre said.

The end score was 21-24 with McKinney winning.

“Very disappointing. This was a big district game, a game that we needed to win,” McCullough said.

After the game, the players and coach were disappointed and knew they could have done better. Though their hopes are not crushed as they expect to learn from their mistakes and play better in their next game.

“We still have a lot of games left, and unfortunately we didn’t win that game, but there are things we can get out of it,” McCullough said.

The Wildcats’ other disappointing loss was against Allen with a score of 38-10 on Oct. 13th.

Allen had started out strong with a 16 point lead in just the first quarter, and Plano only scored one touchdown throughout the game to Allen’s four. This was due to the Wildcats’ weak defense after the loss of senior Caleb Macaway on the team, and the Eagles’ strong offense.