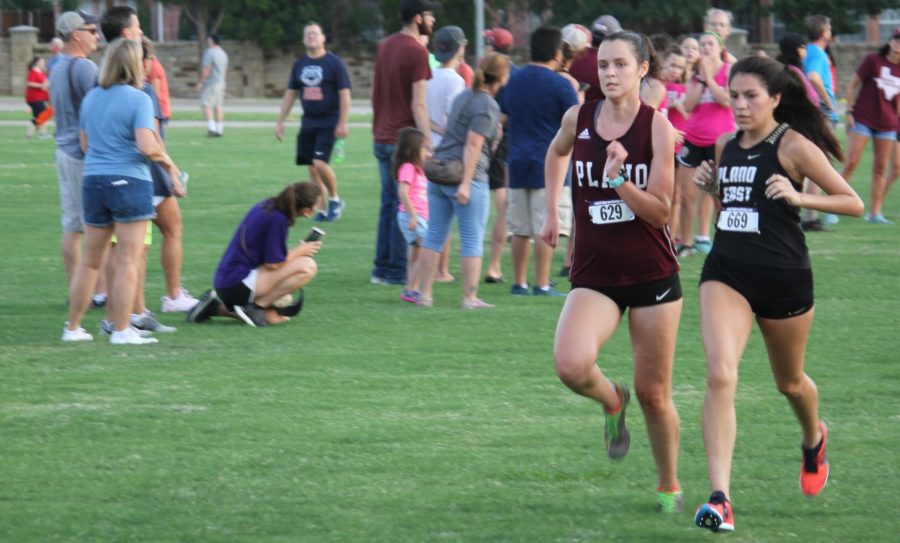 Brooke Dixon pushes herself to get past a runner for Plano East at the Plano Invitational Cross Country meet.

Both boys and girls teams striding to improve
The Wildcats cross country teams are looking to improve their performances over last season’s early ending for most of the runners at the UIL District 6A meet.

Senior Ashlyn Hillyard was the only Wildcat to participate in the state meet, finishing third in the women’s 5000 meters with a time of 17:25.65.

Hillyard is planning to run cross country in college. She is beginning to have visits with a number of colleges.

“I am visiting Texas Christian University, Oklahoma University, Colorado State, University of Texas-Austin, and Vanderbilt,” Hillyard said. “Hopefully, I can get a scholarship for cross country.”

With multiple new runners joining, the team looks forward to making stridestowards improvement on their times.

Last year, both cross country teams, asidefrom a couple runners, were eliminated in thedistrict round of the UIL state championshipbecause the varsity boys team finished in lastand the varsity girl’s team placed fifth.

“Mental perseverance is what pushes you to keep running when you get tired,” Bynum said. “It is also what helps you strive beyond talent.”

Amy Dehdari, the girls cross country coach, thinks that the mix of the newer and the more experienced students will be a key to their success in the sport.

“Young, new faces will learn from older athletes,” Dehdari said. “The older runners are the heart and soul of the team and will provide leadership.”

“When I get tired, I think about the consequences of stopping to help me run faster and longer,” Gillen said.

Gillen had the best performance on the boys varsity at the Plano and Marcus Invitationals with times of 17:22.01 and 17:16. He looks to improve by running more often outside of practice.

“I plan on using the first meet as a baseline, and I’ll improve by running twice a day to get into better shape,” Gillen said.

Bynum is teaching the boys team how to win by training with wind sprints and weight training.

“Winning is all mental,” Bynum said. “I tell them not to over think races because it shifts your focus from the race to just the results of the race.”

Gillen said that running as a cohesive unit is another aspect of cross country, which cannot be done without a good sense of team chemistry.

“Chemistry develops naturally because we are always running together,” Gillen said. “The bond we form is like a brotherhood.”

The cross country team develops a bond by going through challenges together, such as running for extended periods of time in the heat, trying to finish with the best team score.

“They go through ups and downs together,” Bynum said. “Running together and hanging out with one another helps grow that bond.”

Dehdari has a new mindset for her team this year. Instead of practicing for district meets, they are running as practice for the more important competitions.

“We are treating every district meet as if it is practice for the UIL [state] meet,” Dehdari said.

While there isn’t an official diet for the runners, the coaches provide suggestions. The runners must eat healthy foods and drink water to sustain or surpass their running times.

“We recommend that they drink a lot of water and stay away from carbonation and fast food,” Bynum said. “They need to eat what makes them feel good when running.”

Cross country practices don’t only consist of running for a long period of time. The teams must train for invitationals in other ways too.

“Everyday we have a 30 minute warm up of quick sprints and stretches, then either run or lift weights,” Bynum said. “Ice baths are required for runners to make sure they are ready to run the next day.”

The cross country teams expect to, and have already begun to improve this year.

“All of our district meets have top teams to compete against, because of this, team morale is high and everyone is giving their 100 percent,” Bynum said. “The runners must work hard to maintain their spot on the team.”

Cross country wants to prepare the athletes for more than a single race, or even a sport.

Bynum and Dehdari believe that coaching runs deeper than having the best time in a race. The coaches are preparing the runners for life after high school running.

“If you aren’t preparing your players for the real world, you have failed as a coach,” Bynum said.

Both teams have already hit the ground running this year. Despite not winning invitationals, the times for the teams are improving.

In the UTA Gerald Richey Invitational on Sept. 7, the girls team finished in fourth place with Hillyard having the fastest time of 17:38.40.

In the Southlake Carroll XC Invite on Sept. 8, the boys varsity team finished in 33rd place out of 48 teams.

Cross country’s next meet is the 2018 Ken Gaston Invitational Cross-Country Meet on Sept. 27 in Grand Prairie.

“Everyone is improving,” Bynum said. “The team is full of fighters.”