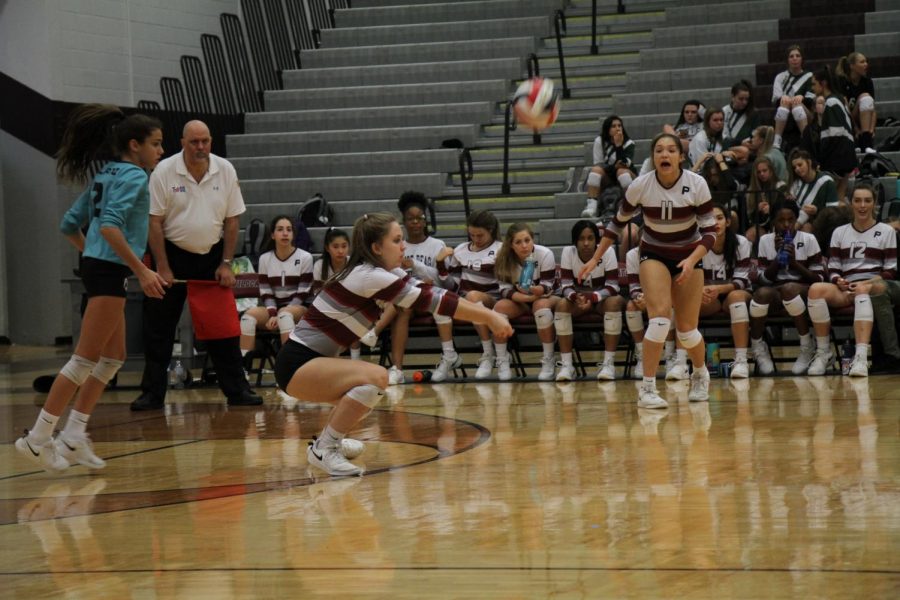 Varsity team trying to keep season alive with win
The Lady Wildcats volleyball team is looking to win a playoff spot in a tiebreaker match against McKinney Boyd on Oct. 26 in Allen despite a slow start to the season.

“We need to concentrate from the first point to the last point,” Minnis said. “We cannot take the foot off of the gas.”

Senior Grace Glasscock is one of the captains of the volleyball team. She is a libero, outside hitter, and a defensive specialist.

She has played 75 sets with 125 digs and 187 receptions while also working hard to motivate her teammates towards success.

“Glasscock is the emotional leader for the team,” Minnis said.

Being a team captain, Glasscock has to do much more for the team than a regular player would do.

“As a captain, I feel responsible to be a good influence to my teammates,” said Glasscock. “I’m always trying to motivate the team to play better.”

A team must have the right mindset to set them up for success. The Wildcats focus on playing for and supporting each other.

“We need to focus and play hard,” Glasscock said. “We can’t let any ball drop.”

Team chemistry is crucial to success on the volleyball court, but it can be built up off of it.

“We goof around all the time and hang out together outside of school,” said Glasscock. “A good bond creates trust and support when playing volleyball.”

Senior Julia Adams is an outside hitter and a superb player for the team. She has played 81 sets and leads the Lady Wildcats in kills with 435 and kills per set with 5.4. She attributes her success to hard work.

“Becoming a successful volleyball player is all about repetition and dedication,” Adams said. “I am also surrounded by great coaches who help guide me.”

Adams believes passion is the single biggest need for a volleyball player to have.

“You won’t get better if you don’t have a passion for the game,” Adams said. “Loving the game will give you motivation.”

The upperclassmen are showing the four younger players the ropes.

“We know that it is scary to play in higher leagues as a freshman or sophomore,” Adams said. “We try to comfort and guide them in as many ways as possible.”

The team makes sure to support each other on and off the court. The players on the team create bonds for life with one another.

“We have such a strong bond and relationship,” Adams said. “We are all best friends.”

Volleyball is looking to finish strong and make the playoffs in the waning moments of the regular season. The team has an overall record of 20-9 and will play McKinney Boyd
with their season on the line Friday. It will be a challenge that the girls will be ready for. (game not played at press time)

“We have the pieces to be great,” Minnis said. “It’s up to the girls to decide what happens.”