Swim and Dive makes a splash at regionals 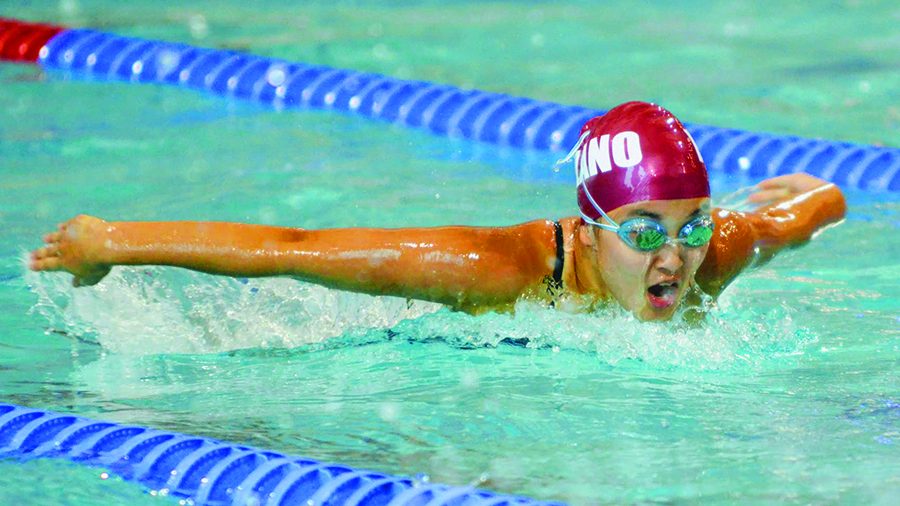 The swim team is looking to achieve success at state on Feb. 14-16 after a great outing in districts and regionals.

In districts, the boys team placed third overall and the girls finished in fourth, with 90 percent of swimmers setting personal bests.  Twelve swimmers moved on to regionals, consisting of four girls and eight boys.

The team had six first place finishes, with junior co-captain Alex Sanchez taking first place in the 100 butterfly and 100 breaststroke, junior Thomas Kuo winning the 50 freestyle, sophomore Jessica Yin defeating the competition in the 100 backstroke and a team comprised of Sanchez, Kuo, sophomore Austin Ngo and junior co-captain Andrew Ham achieving victory in both the 200 Medley and the 200 Freestyle relays.

In regionals, all 12 swimmers made the finals, with Sanchez, Kuo, Ngo and Ham moving on to state. The boys team finished in fifth place overall and the girls placed seventh despite only having four swimmers.

Head swim coach Xandra Damon thinks the swim team needs to mentally believe in themselves to accomplish victory at state.

“We understand that we can make it physically,” Damon said. “Each swimmer needs to trust that they have what it takes.”

Along with being in charge of swim, Damon is also the diving coach. The diving team is composed of only three sophomores.

“The whole team is brand new to diving,” Damon said. “They just need to gain experience.”

Although no one on diving moved on to regionals, each competitor gained a lot of practice by taking 11 dives at districts.

Swim is thought to be a primarily individual sport, but it requires more teamwork than most people think.

“Teamwork is crucial,” Damon said. “You have to have people cheering you on if you want to win.”

Junior Bianca Weimer thinks the driving force behind the team’s success is team unity. Weimer made it to the regional round after coming in second in the 100 freestyle and fourth in the 50 freestyle at districts.

“Becoming one team has had a really great effect on our success,” Weimer said. “We push and support each other.”

Senior Justin White, co-captain of the boys team thinks the team will do fantastic at state.

“We really pushed ourselves this season,” White said. “Everybody’s ready to kill it.”