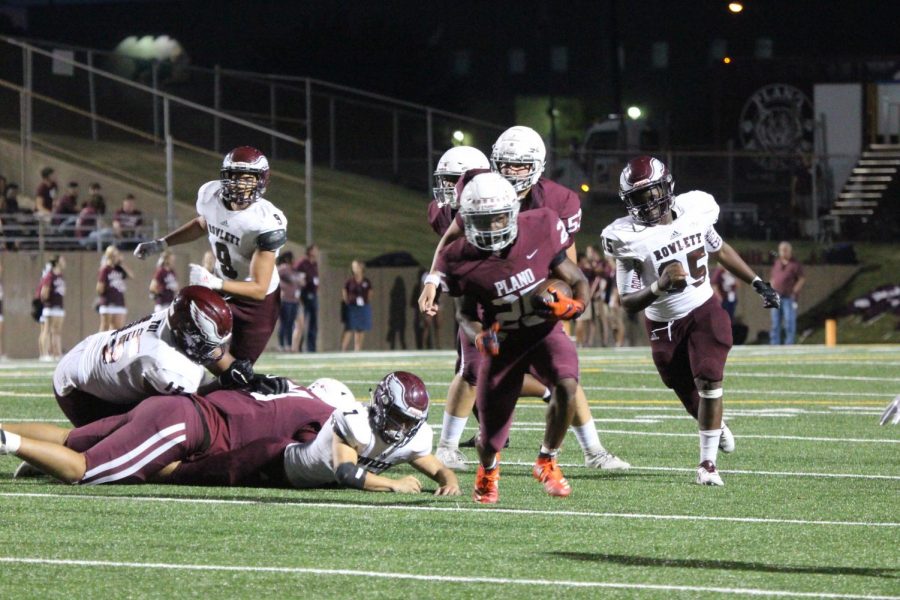 Running back Tylan Hines running the ball down the field in the Plano vs. Rowlett game.

The rivals of Plano and Plano West are about to clash for victory on the football field on Sept. 27 at Clark Stadium.

“West has always been a traditional rival to play,” senior Cody Crist said. “There’s a general excitement around and everyone on the team knows that their job is to win.”

The last time Plano West won a game was all the way back in 2016, but they haven’t beaten Plano since 2015. Head coach Jaydon McCullough has maintained a winning streak against West over the past three years.

“We look to increase our win streak to four by playing at their absolute best and try the hardest to win at every game they encounter,” McCullough said.

Last year was considered to be a disappointing season for the Wildcats with a 5-5 record, and they didn’t make it to the playoffs.

“It wasn’t our record, [that was the problem] we were disappointed that we didn’t beat Prosper and couldn’t make it to the playoffs,” McCullough said. “We tried our best and kept each game close in score.”

McCullough said that although the rivalry between the schools is deep, the team will treat the game normally, but to win they will need to show up on both offense and defense.

“We’ve got to control the ball, have no turnovers and take advantage of the red zone,” McCullough said. “The team has to execute the game plan and live up to the expectations placed on us.”

The graduation of Kyron Cumby left a great void on the team. Nevertheless, the role has been filled by Crist and junior Oliver Towns.

“The positions aren’t all filled yet as there are battles still going on,” McCullough said. “The star players are known, but the team is constantly evaluating as the season goes on.”

The one question is whether the team has the grit and determination to perform better than past years.

“Self-discipline, work ethic, and motivation to victory are the team’s core values,” McCullough said. “It’s not about individuals, but a whole team of people.”

Crist, one of the running backs, believes the rivalry between West is an aged tradition, but still invoked excitement to play them every year. Even though West has been a poor team for a while, Crist still considers them rivals that shouldn’t be taken lightly.

“We play them every year since they parted with our school,” Crist said. “They’ve had some good years, but we’ve had more recently.”

The rivalry is long running at this point and hugely important to players on both teams.

“The game means a lot since it gives us a boost to beat West at any game, and they have many players we’ve grown alongside with over the years, creating huge stakes to win,” McCullough said.

The team has to mentally prepare and be ready for any game, especially one as popular like this.

“We prepare later into the season, it’s the same week to week,” McCullough said. “Identifying our strengths and weaknesses are priority for us.”

The chemistry this year seems to be right on track to keep the streak against West alive.

“We’ve had some good teams and a large amount of talent has come through,” Crist said. “This year we’re all on the same page and have a good shot of winning unlike any other year.”

Even though the game isn’t any more important than other district games, the players seem to understand the importance to fans.

“It has been a traditional rivalry that roots back even farther back than me,” Hines said. “We just use the winning streak as motivation to not be the ones that ultimately break it,” Hines said.

With the lack luster performances of West over the years, some don’t even consider it to be much of a rivalry any longer. However, enthusiasm for the game is definitely present year after year.

“It’s still a rivalry knowing they’re a poor team and exciting because of the tradition,” Hines said.

The plan to beat West has come down to one simple plan of victory and achieving it will only come by hard work and determination in practice and taking advantage of West’s weaknesses. Although it’s all up to how the coaches work and push the players.

“I believe he [McCullough] is helpful because they’re always pushing us to the fullest and making sure we are the best players on and off the field,” Hines said.

The expectations for this game are building each day and one would think there’s a great deal of stress involved for bringing home the win, but Hines said the team doesn’t let it get to them.

“We don’t let the hype and all the side distractions get to our heads,” Hines said. “We focus on winning and keeping the streak alive.”