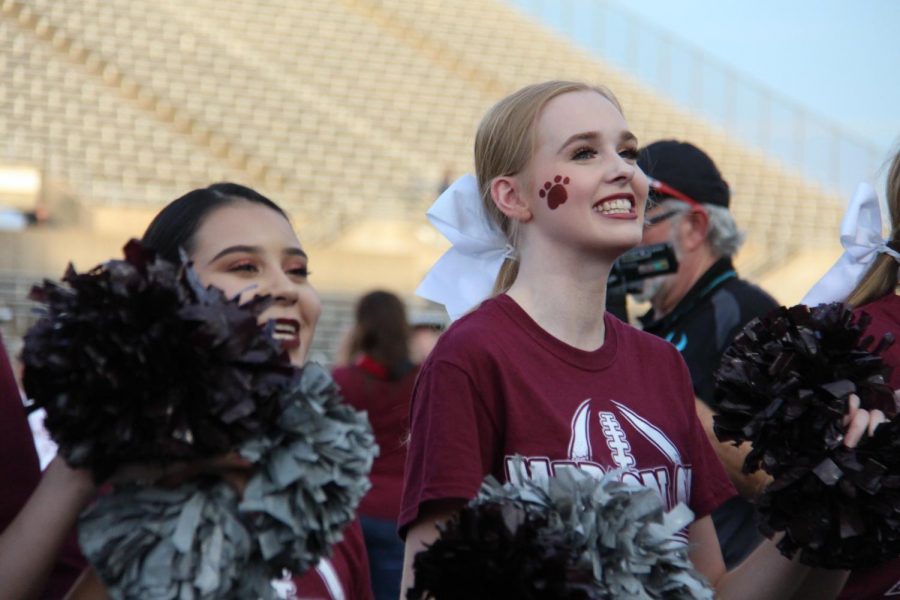 Alyssa Franks and Karen Linares rally the crowd at a game.

“Last year, we really focused on traditional Wildcat songs and dances,” head cheer coach Rebecca Keliikuli said. “This year, we wanted to see what it would look like if we stepped out of the norm and see what we can do, and I think it’s paid off.”

However, this year their routines were completely new, and they took a risk on a younger and more modern take of cheer.

“I think we focused more this year on meeting all the criteria, and it’s definitely [this year’s routine] cleaner than last year’s,” senior cheerleader Megan Rooney said.

The cheer team started practicing for the competition in October, which was an unusual time because practice usually starts in August, however, this time crunch encouraged the team to work diligently in order to perfect their routines for the fast-approaching UIL tournament.

“We practice during our sixth period, and sometimes a little into seventh, and on some Saturdays our practice would be four to five hours,” junior cheerleader Breyanna Neville said.

Although the team faced some obstacles with the UIL eligibility standards, they were able to pull through together in order to achieve their goal.

“It was challenging, and there were a lot of bumps in the road because some girls weren’t able to compete anymore or became ineligible so we were changing around formations all the time,” Rooney said.

The process of creating the different routines for UIL were challenging as well, since the guidelines and rules teams have to abide change every year with new regulations transforming how the competition is scored.

“What we like to do when choreographing competition routines is to actually hire out a choreographer who knows the rule book by heart, keeps up with changes, and knows what the judges are looking for,” Keliikuli said.

“A lot of it [practice] is repetition, and what my coach always says is, ‘You know you’re ready when you can just do it in your sleep,’ it should be like muscle memory,” Rooney said.

The team performed a band chant, a fight song and a cheer. At the competition, the goal is to get the crowd involved and cheering along with them, while also executing their routines perfectly in order to impress the judges.

“It was difficult because we had three different routines to memorize in such a short amount of time,” Neville said. “Overall, it really came together because we realized how much time we didn’t have, and that we just needed to work together.”

Although the team didn’t make it into the final rounds of the competition, they are looking forward to improving their program and getting more involved with the local district.

“We’re gonna start being more involved with the community and school events, and as much as the Planoettes are the Pride of Plano, we are going to be the spirit of Plano,” Keliikuli said.