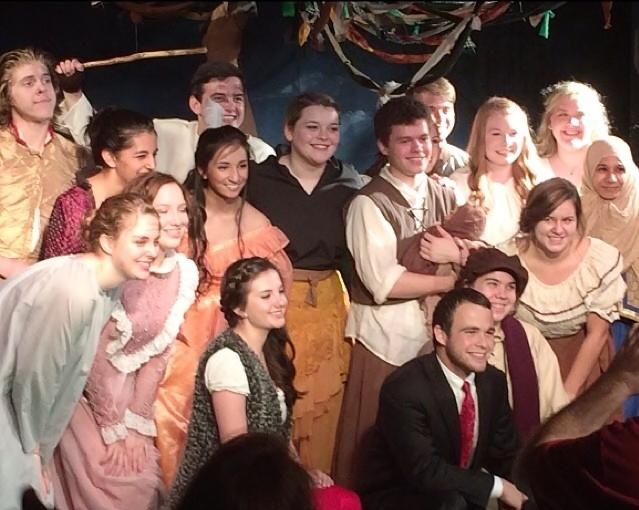 The cast of Into the Woods, a student based theater production seniors Jason Head and Maggie Harvey collaborated on, shares a smile in a group photo. "We had a plethora of talented actors," Harvey said.

As featured on Best of SNO

A boy slides in and out of the crowds, struggling to balance the different personas he possesses, the identities only he knows about. From friends to family to teachers to strangers, he has a mask for every one of them.

Seniors Jason Head and Maggie Harvey are making this vision a reality with a team of fellow students in their new short film, “Faces.” The pair, who worked together over the summer in a production called “Into the Woods,” have decided to collaborate to make a short film for a UIL competition in January. According to Head, once senior Luke Jenison, the writer of the film, had come up with the idea, the group took it and ran with it. They have already put together a production team and are currently in the very early stages of pre-production.

“It’s hard to make a film by yourself,” Head said. “You need people that you can collaborate with and make a team.”

Harvey said “Faces” will be a social commentary that tracks the different masks one teenage student wears throughout a day of high school.

Struggling to make it through his day balancing his different personas, Harvey said the boy will eventually realize that he only needs to be himself.

“It’s all about how people can’t really tell that you’re wearing a mask,” Harvey said. “A mask isn’t really something that’s automatically noticeable, so though it’s noticeable to him, once it’s on, it’s who he is. It just melts into his face.”

Jenison may double as writer and actor and play the lead role. Outside of the lead, there will also be a female feature role who plays a key part in delivering the message of the film.

She’s the person who plants the seed in his brain like, ‘I don’t need to be all of these fake images,'” Jension said. “She’s the catalyst to his realization.”

Jenison came up with the idea through a poem he read in American Studies last year, and after developing the idea more, the team decided to put it into action. Having already established the outlines and writing of each scene, the team is now moving on to the technical things that are needed for the shoot, including a shooting schedule, cast, props, wardrobes, extras, and all of the details that go into producing a film.

“Basically what we have left is pulling our resources together, and then just filming and editing it,” Jenison said. “We’re going to try to film over the course of just two days, because it’s going to be about seven minutes long. We want to do it in a short period of time so that everything is consistent.”

Students can submit their film entries for the competition from Jan. 1 through Jan. 21. “Faces” will be entered into the narrative category, as opposed to the other categories, documentary and animation. The entries will undergo a preliminary judging round, after which three films from each category will be chosen to go on to the state competition in March.

“If you make it to state, you get to go down to Austin, where they have a film festival,” Head said. “You get to go to like a red-carpet-premiere type thing, and your film will be shown in a theater. It’s definitely something to work for if you get there.”

The students are working on what they call a “no-budget film.” Filming under the “no-budget” category does not necessarily mean that no money is spent, but, according to Head, it means that there isn’t a lot of money at the filmmakers’ disposal.

“We did a small campaign on a website called Tilt, for our short film, and we did have some people donate,” Head said. “We thank them so much for supporting us.”

Currently, there is not a teacher sponsor for the project. Head said the film is completely student based and student run, although there will probably be a teacher sponsor sometime in the near future. As far as winning the competition goes, the team is optimistic.

“At any type of arts competition, it’s subjective to the judges, so you never know,” Head said. “I would like to believe that we have a very good shot. I’m excited for it.”

Anyone interested in participating as an extra can contact Jason Head through a direct message on Twitter (@jasonhead44). Participating extras will receive credit for the film, and although the dates and times are not set yet, may need to spend a few hours before or after school for the shoot.