Parking predicaments: Student drivers find themselves in a tight spot 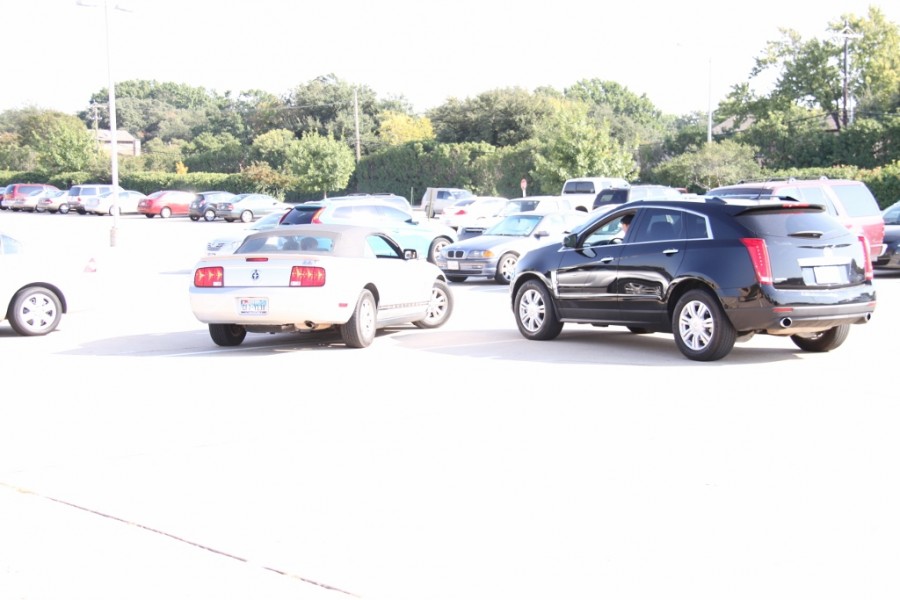 Junior Michael Sessions narrowly avoids an accident in his Ford Mustang convertible in the parking lot near D building while attempting to leave after 6th period. "Parking lot issues persist most in the afternoon," Sessions said. "Everyone is trying to back out at the same time and it causes chaos." Photo by Cameron Drummond.

Issues of limited parking spaces, parking lot maintenance and traffic congestion have hampered students that drive to and from campus. These problems, along with others, have provided plenty of work for Gamma Sub School Principal Bryan Spiritus, who has been in charge of handling parking lot issues for the past three years.

“At the beginning of the school year, juniors that are driving are just starting to get used to it and that causes a little bit of an issue,” Spiritus said. “But we also have issues in the spring because we have so many more students driving then than at the beginning of the year. It’s an on-going problem.”

The most frequent of these on-going problems Spiritus sees involve a lack of parking spaces upon entering the lot and congestion whilst exiting it.

“I don’t foresee any changes that would affect traffic congestion because we really have no more property to expand parking onto,” Spiritus said. “We have maximized our space. If we were to change the traffic patterns, then it would probably result in the loss of parking spaces and make the problems worse.”

Junior Emily Robicheaux experiences her biggest parking lot woes due to this congestion.

“There are so many people going in and out of the parking lot, it gets crowded and takes forever to get through,” Robicheaux said. “There are only two entrances and exits going out of the lot near D building, causing some issues. It would be really helpful if there was another entrance on the other street because most students exiting have to turn right onto Independence anyway.”

Another issue Spiritus and the administration have dealt with is the overall maintenance of the parking lot.

“The issues with the maintenance of the surface of the parking lot were addressed last summer with the re-asphalting, so a lot of the potholes are now gone,” Spiritus said. “I believe most of the work has now been done where the major holes were.”

Despite this work, junior Michael Sessions continues to deal with issues concerning the width of the lanes in between rows of parking spots.

“The roads are just way too narrow when you are both backing out and pulling into a spot,” Sessions said. “Multiple times I have almost backed into another car while exiting a space when trying to leave school.”

Sessions has also come up with his own solution to the problem of narrow roads.

“The school could possibly make wider lanes. It would only be repainting the current ones to give a bit more room,” he said. “The students pay $75 for a parking pass, the funds from that could be used for the repainting.

Junior Farzan Khoshravan faces the majority of his parking lot dilemmas when arriving at school in the morning.

“Entering the parking lot, there are lots of speed bumps, which are especially annoying because my car is an old 1997 Toyota Corolla, along with the issue of the lack of a stop sign,” Khoshravan said. “Some people just go wherever they want to without waiting. It just doesn’t work well in the tight space of the parking lot.”

Senior Daniel Moore differs from Khoshravan in that he feels the pressures of traffic congestion when leaving school in the late afternoon.

“It’s pretty much chaos in the parking lot right after seventh period,” Moore said. “If I’m not immediately going outside to my car, I usually have to sit in line for about 10 minutes. It’s kind of an annoying thing for me, but other people may not feel the same way.”

Moore believes the issues he faces this year are comparable to those from last year.

“The congestion in the parking lot is just as bad this year as last, it all goes back to the idea that there are so many cars and only two exits,” he said. “I think the only way to solve the problem would be another exit, but there’s really not much you can do about it.”

Sessions said he fears an accident may occur anytime he drives in the school parking lot.

“I’m not overly protective of my 2009 Ford Mustang, but I feel like my car is in immediate danger anytime I enter the parking lot,” he said. “There are some bad drivers here, and I would be mad if any of them hit me.”

In order to prevent accidents, Spiritus urges students to slow down when driving inside campus parking lots.

“A lot of the crashes we have are because students are in a rush to get out,” Spiritus said. “It can get congested in the afternoon and we have fender benders and other minor accidents as a result.”

Spiritus invites students with difficulties in the parking lot to be proactive and come up with potential solutions themselves.

“Students always come up with good ideas that we have never thought of,” Spiritus said. “Those who see an issue should go onto the school website, go to the administrative page, click my name and e-mail me. They can come visit me and we’ll explore any issues they are having.”