Candidates on their toes as the run-off unfolds 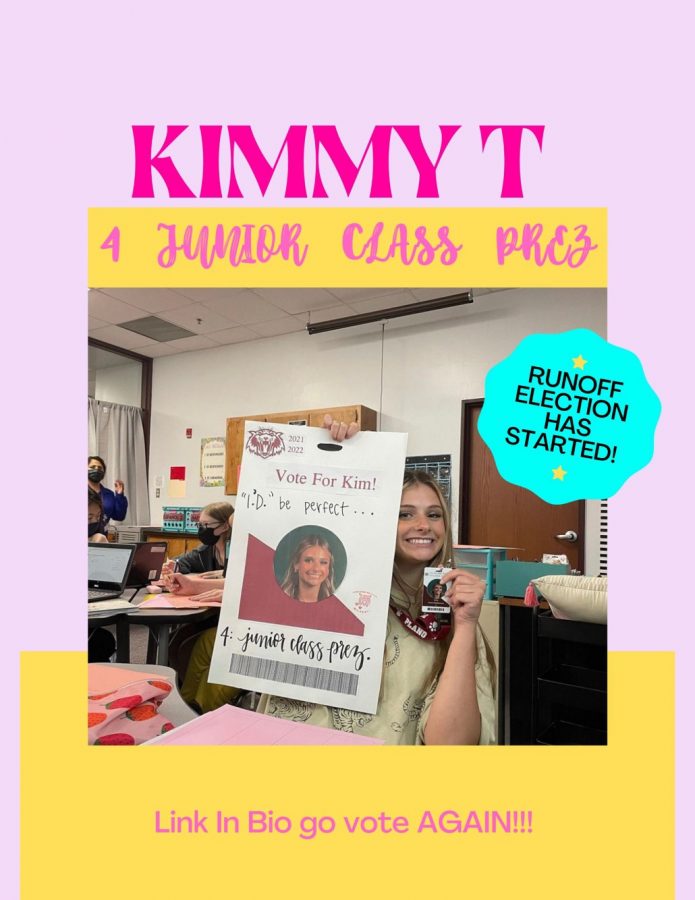 Three ambitious Plano Senior students ran for Junior Class President and on Sept. 1, Jace Thomason came out victorious and was elected for the position.

“I’m looking forward to continuing my work in [Student Council] with such a talented group and being able to represent my Junior class this year,” Thomason said.

Alongside Thomason, Kim Torten and Youcef Daddi ran in the Junior Class Presidential election. All three candidates ran to achieve personal and school-wide goals that would make an impact on the campus.

“I ran for JCP because over the course of the pandemic, the school and the student body have not been able to fully complete goals set from the previous year,” Daddi said. “I ran to accomplish those goals and to make a better, more successful student body.”

The candidates used various techniques to enhance their campaign and draw in votes. They campaigned with signs around the school, social media posts and the help of their fellow students.

“I had tons of friends reposting and sharing my Instagram posts, as well as some even going the extra mile and yelling ‘Vote Jace for JCP!’ in the hallways,” Thomason said.

Thomason wasn’t the only one who had student support behind the scenes. Runoff candidate Torten gathered immense encouragement from the followers on her Instagram campaign account.

“Whether it was a student I had never met before saying I had their vote in the hallways, or people reposting my social media campaigning, it was extremely helpful to feel that I had reached people and become an approachable figure on campus,” Torten said.

After the juniors considered the campaigns and qualities of each of the three candidates, they voted on the online ballot. After all votes were calculated, Daddi was eliminated from the election and Thomason and Torten went into a runoff.

“I was definitely feeling a mix of relief and excitement knowing that I had at least made it that far and was potentially on my way to a win,” Torten said. “It was a satisfying experience and encouraged me to end my run on a high note.”

On Sept. 1, the second round of votes were gathered and it was announced that Thomason had won. He then assumed his role as Junior Class president and was eager to represent the student body this school year.

“As the year progresses, I think I will be able to help get the students what they want and need,” Thomason said. “I’m sure there will be unique situations this year where I can use my leadership skills and be a guy who just encourages people and promotes positivity on campus.”

Thomason isn’t the only one who is confident in his abilities to lead as Junior Class President. Both Torten and Daddi have faith in him as well and believe that he will accomplish great things this year.

“I got to know Jace over the campaign and I know him to be a very honorable, dignified, smart and capable individual,” Daddi said. “I have no doubts about his abilities and I want to help him in any way I can to make the student body greater than it ever was.”

Due to successful campaigns, Daddi and Torten earned spots on the Superintendent Student Advisory Committee, a committee Superintendent Sara Bonser utilitzes for advice from the student perspective. Thomason left the Junior Class with some words of wisdom and inspiration to get through these last couple of years.

“There’s only one time in your life where you get to be in high school,” Thomason said. “I encourage every junior to give it their all and do the things you want to do to have a memorable high school experience.”