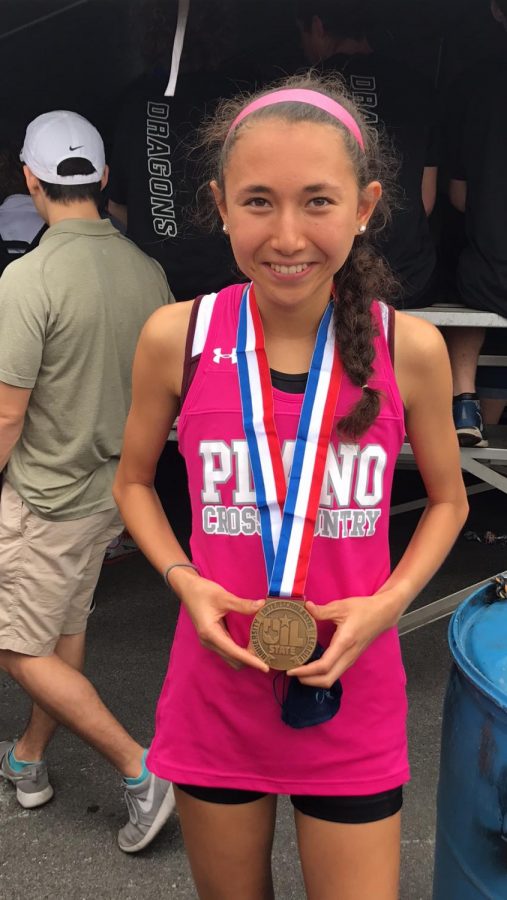 Junior Ashlyn Hillyard blew away the competition at the UIL 6A State Cross Country meet in Round Rock, coming in at third place with a time of 17 minutes and 25 seconds.

Under the leadership of her coach Amy Dehdari, Hillyard puts in tremendous effort both inside and outside of school.

“Over the summer, I ran 40 or more miles a week, even while on vacation,” Hillyard said. “On Mondays and Wednesdays I typically run four miles in the morning before practice to increase my mileage. I also have Saturday long runs where we meet at six a.m. to get in nine or 10 miles.”

Hillyard credits her dad as one of her biggest inspirations this track season, and one of her most active fans.

“He is so supportive and always comes to my meets, no matter where they are or what time they are held,” Hillyard said. “I always want to run well for him.”

This record breaking track star also knows the importance of her dramatic win at the Marcus 1 Regional Qualifier.

“My biggest accomplishment this season would be my win at Marcus, breaking the course record,” Hillyard stated.

Hillyard has big plans for her education after graduating high school.

“I am definitely planning on running in college. I’m not exactly certain where yet, but it will definitely be for a D1 school,” Hillyard said.

D1 schools are part of the NCAA’s divisional rankings, with D1 schools being some of the largest and most well funded universities.

According to Ashlyn’s coach, Amy Dehdari, no other runner in her time at Plano has come close to the level of success and effort Ashlyn has put in this season.

“Ashlyn is one of the best distance runners I have had the honor to work with. I can only see her continuing to get faster and stronger this year and beyond,” Dehdari said.

Junior Katherine English has also seen the improvement brought on by Dehdari in herself and in her team.

“My 5K time has been cut by four minutes, and so has most of the cross country team’s times as well,” English said. “I’ve seen all the newcomers improve so much in such a short time, getting faster and stronger in just the one year they have had Coach Dehdari.”

Hillyard also recognizes the new strength brought on by Dehdari, and feels her time running track at Plano has benefited her greatly.

“Joining the track team was honestly one of the best decisions I have ever made,” Hillyard said. “I’ve reached goals I never thought I could achieve before this.”