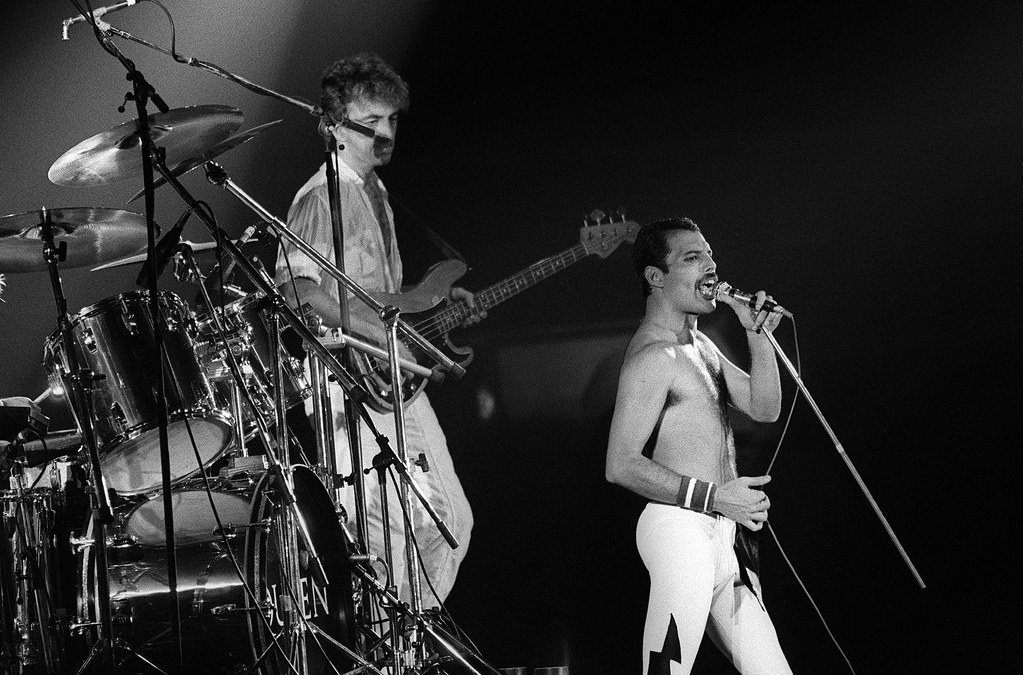 Freddie Mercury performing in Paris after the release of, “A Night at the Opera” (Rogelio Galaviz)

Freddie Mercury performing in Paris after the release of, “A Night at the Opera”

At first glance, Bohemian Rhapsody, released Nov. 2, is a movie depiction of the great Freddie Mercury of Queen, a 1970’s rock band that shook the world, dramatizing the internal struggles of Mercury’s personal life.

The PG-13 film tracks the spectacular uprising of a British rock band through their iconic hits and distinguishable sound. It was a feel-good movie that invoked nostalgia into rock and roll fans causing their desire to turn up the inventive anthems of their News of The World album.

I was invited, which just feels like a very rare thing, especially when you’re auditioning for someone as magnificent and iconic as Freddie Mercury. ”

Rami Malek as Freddie Mercury does an impressive job of portraying the posh British rock star and gracefully recreating Mercury’s moves on stage. He may not be Mercury, but he captivates the audience, making them believe that it is his voice that is coming out of his mouth.

The movie begins with Mercury watching a band named Smile that he has been following for a while. The lead singer of the band, Tim Staffell (Jack Roth), quits the band to join Humpybong. This sets up Mercury’s opportunity to become the new lead singer of the band, assisted with bassist John Deacon (Joseph Mazzello), drummer Roger Taylor (Ben Hardy), and guitarist Brian May (Gwilym Lee).

When the band finally begins to harmonize, Mercury navigates the way to the band’s success. He decides to sell the group’s tour van to finance the recording of an album, and, in the studio, he coordinates the band as well as he devises the ecstatic technique in which they create it.

The film moves quickly through the plot, not really diving into the development of Queen, but the internal struggles of Freddie Mercury and the band. The supporting characters are not really given room to grow as the film mainly focuses on the battle between the tragic artist and himself.

It is a compelling storyline and dedication to a renowned superstar, it features an elaborate part of Mercury’s relations with Mary Austin (Lucy Boynton). Her reconciliation with Mercury provides a sense of home for the film. It is one of the few relationships that gives the audience insight into the personal life of the man that was the face of Queen.

In the scene in which Mercury and Mary Austin split up, Boynton stated in an interview by NME that it was “a creative interpretation because no one else was in the room so no one else knows what exactly was said.”

The filmmakers fail to include Mercury’s growing passion for music, dedication to rock and roll and his humble beginning, as well as the significance of the other band members.

All the audience knows of the other band members are that Roger Taylor is in love with his car, Brian May is obsessed with his 70’s curls and John Deacon was called ‘Deacon John’ to sound more interesting.

Although it does establish Mercury’s evolution from shyness to his on-stage exhibitionism, many critics had bashed on the film for being a sanitized version of Queen, stating that the life of a rockstar is not complete without the abundance of drugs, sex and partying. The film provides mediocre comical relief in Mercury’s childlike manner.

From the beginning of the movie, tension is built between Mercury and his father (Ace Bhatti) for his refusal to pursue a practical career to instead chase the dreams of a rising young rockstar. In a scene following Queen’s final performance, all of the strain built up over the years had all been released through a brief embrace; no words. This scene ignored his stress and fear of coming out as homosexual. Nevertheless, it is heartfelt in a way that it provides closure to a conflict that had been spread throughout the whole film.

Live Aid, 1985, the final great performance for Queen, exemplifies Mercury’s development of his relation with his own self; his budding love for Jim Hutton (Aaron McCusker), his lifelong friendship with Mary Austin and the everlasting brotherhood with Queen.

The depiction of this concert is lively and stimulating to the audience instilling nostalgia to the era of Me Decade. This performance concludes the reign of Queen over the kingdom of rock and roll leaving a grand legacy for future artists to build upon.