Tyler Bryson shows his talent on and off the course. 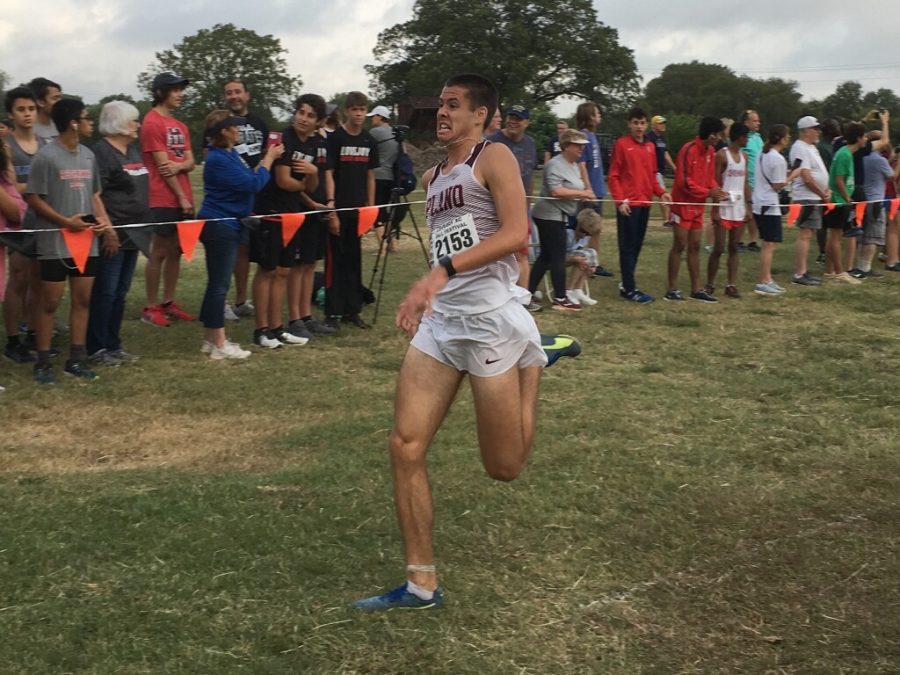 Bryson strains to the finish line at a cross country course a viewers awe.

While senior year may be stressful for some, for senior Tyler Bryson it’s an opportunity to get as much experience as possible.

“The thing I like about running is that you can only train so hard before you have to stop,” Bryson said.

Bryson is the varsity captain of the cross country team where he is in charge of 41 runners ranging from freshman to seniors.

“He’s a really fun leader,” varsity co-captain Tyler Drueckhammer said. “He’s tough when he needs to be, but he’s always there to make a joke or lighten the mood.”

Starting out Bryson not only enjoyed, but thrived in long distance. He started out in track and then shifted to cross country soon after.

“I first showed my love of running after basketball season in eighth grade,” Bryson said. “My coach pushed me toward track and cross country where I found my natural talent.”

Bryson’s recorded personal best for the 5000-meter race is 17:48 at the Lovejoy XC Fall Festival-HS race on Sept. 21.

“He’s a really strong runner,” Drueckhammer said. “For only being in his second year of cross country, his competitiveness has already gotten him near the top of varsity.”

“We have a young man on the team that needs additional assistance and he ran in his first race this year,” boys cross country and track coach Maurice Bynum said. “Tyler went out of his way to go two miles back to run with this kid all the way to the finish line and that shows heart.”

Bryson manages to balance cross country with his numerous other extracurricular he is a part of.

“I’m part of a group that hypes the crowd up during games, varsity art team, AP design, and I even have a band,” Bryson said.

While he has a lot on his plate, he still manages to stay dedicated to running and laser focused on his craft.

“The dedication I get from Tyler is 100 percent there,” Bynum said. “To run cross country or to run for district you have to be dedicated to it.”

As a senior, Bryson is trying to squeeze as much experience as he can out of high school, yet he still manages to have free time.

“Typically during the season I go for an early morning run to start my day and wake me up,” Bryson said. “I also do photography and draw when I have down time.”

For a sport that is trying and requires dedication and focus, having a support system is vital for being able to stay motivated.

“We have pregame pep talks before the meet that we both enjoy,” father Scott Bryson said. “I enjoy the facial expressions he makes while running that we get pictures of.”

With cross country season coming to a close and track season starting up in February, Bryson is looking forward to trying something new.

For such a talented runner and student, the future seems wide open for someone like Bryson.

“I do think I will continue running after high school even if I’m not running competitively,” Bryson said. “I could see myself being 80 years old running ultra-marathons for fun.”